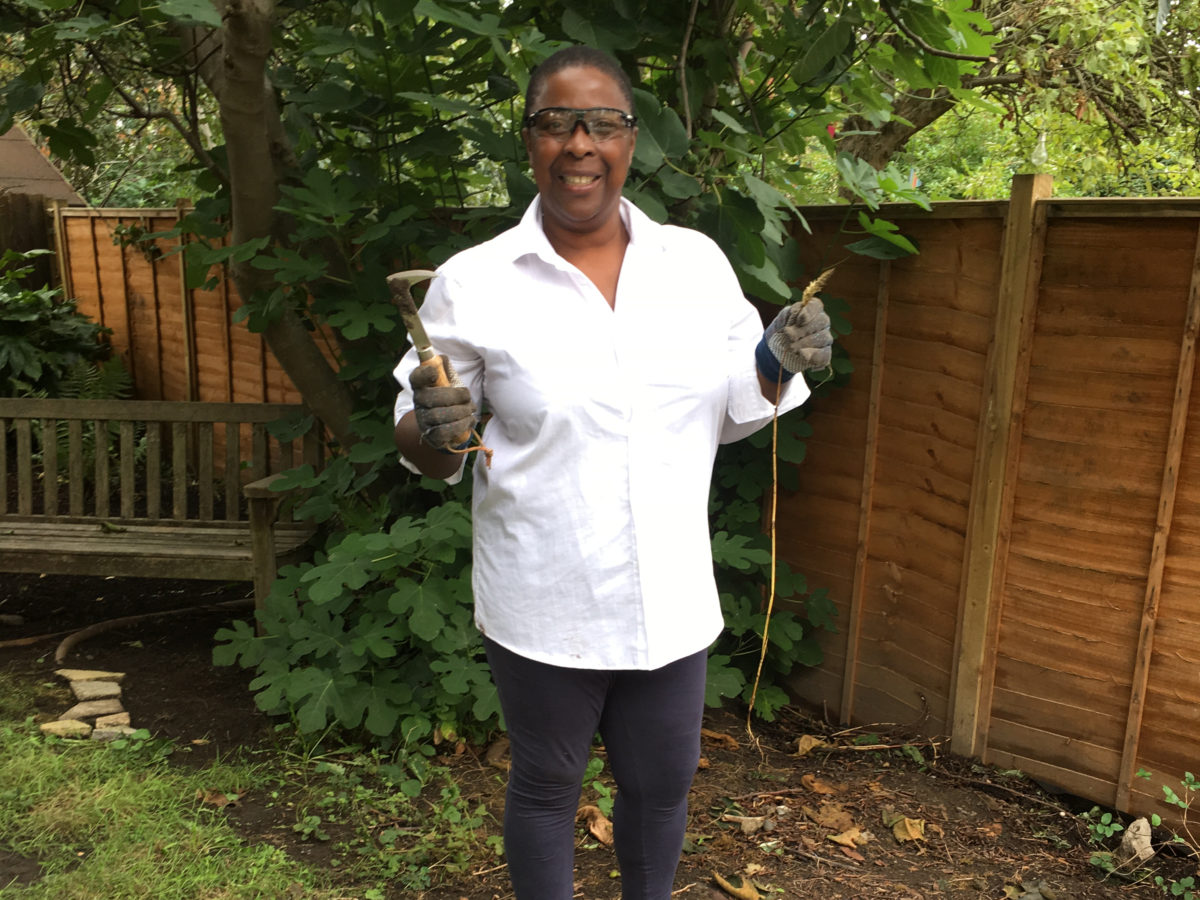 Nana reflects on some of the people she has met, despite their difficult and challenging lives, they live in hope that they will eventually harvest their produce.

CAFOD’s World News Manager, Nana Anto-Awuakye explains how your donations for Family Fast Day will instill hope into those that see eating as a luxury.

On Sunday 23 September, pottering about in the kitchen, my constant companion – the radio – informs me that this very day is the autumn equinox, when day and night meet as equals, the official start of autumn.

I glance out through the kitchen window onto my garden, and see that the leaves are already falling, and turning their magnificent autumn yellows, browns and berry colours.

Bringing the garden back to life

Over the long hot summer, I rediscovered my overgrown garden, and after twelve large garden waste bags were disposed of at the green recycling centre, I got down into the earth and started putting in plants bulbs, shrubs and wild flower seeds into the newly tilled earth. I’ve even had a go at planting some winter potatoes, carrots and broad-beans, hoping they might grace our Christmas lunch table.

I surprised myself at how passionate I became, waking up each morning and getting out into the garden sipping my morning cup of tea, surveying what tasks I’d do next, while plucking out weeds as I went along.

It was on one of those, tea-sipping, weeding plucking mornings, that behind the garden bench I found a couple of wheat stalks, golden yellow against the chocolate brown earth. How odd I thought, gathering them up, how did they get here?  Through animal droppings, or carried on the Kent winds from a distant farm.

The wheat stalks, and my newly found gardening passionate made me think about harvest, and some of the people I’ve had the privilege to meet travelling with CAFOD. People who despite their difficult and challenging lives, worked their small plots of land, worked on their vegetable gardens, with patience, and a great deal of hope that they will eventually harvest their produce.

The generosity of people who have very little

I remember in northern Ethiopia, meeting Herit , during a severe drought struggling to take care of herself and her children, telling me that she couldn’t remember when she last ate three meals a day. Sitting outside her home, I’ll never forget her words: “If I did not get this assistance, I and my children would be dead here. Because I have been able to buy food, my children are living and we are surviving.” Herit, went out on to her field, borrowing an oxen and plough from a neighbour, and with seeds from our local Caritas agency, she planted, patiently and methodically, believing that next season she will harvest.

Find out how you gave hope to Herit and her children

The piercing blue-green eyes of Souraya, a Syrian refugee, living in Lebanon’s Bekka valley, will never leave me. worried about her husband injured from a bombing raid as they crossed the border into Lebanon, and in hospital, and how she was going to feed her young children clinging to her skirt, on a freezing cold December morning. Souraya told me, that Caritas, was the only hope she had, they hadn’t forgotten her needs, and were supporting her with food vouchers.

In northern Kenya, I met the women in Daaba village who were also struggling to survive because of a severe drought. I met Lotom, who was carrying her one month baby girl Eveline very close to her, swaddled in a colourful red and red cloth. Despite a lack of nutritious food during her pregnancy, Lotom was one of the lucky ones, she and her child survived.

Global hunger on the increase

For many of the families I’ve met, to put it simply, eating is a luxury. I’ve seen the eyes of mothers deep in worry and fear, wondering where the next meal is going to come from to feed their children.

This month the UN’s World Food Programme released an alarming statistic – that the number of people going to bed hungry in the world is on the rise – reaching 821 million in 2017 or one in every nine people.

It’s truly shocking to read, and yet easy to also glaze over, when we read these kinds of bold statistics, or hear that there is yet another drought. But, behind every number, is a person or a family going hungry through no fault of their own in the face of a changing climate, war or violence, leaving them struggling to feed themselves.

Your harvest donations will make a lasting difference

Whether it’s the changing climate or devastating conflict, I’ve seen CAFOD’s local aid workers, anchored in their communities, working fearlessly to provide solutions to these seemingly intractable issues – supporting families to be self-sufficient, or reaching vulnerable communities with emergency food.

Your simple soup supper could save someone’s life

In northern Kenya Father Stephen Murage – director of Caritas Isiolo told me: “We can’t stand by and let people suffer. We must respond. Responding creates hope in people’s hearts. When people see Caritas, they find the strength to carry on, to survive.”

Last November, I received an email with news of Herit in northern Ethiopia – a photo of her smiling hugging bundles of wheat. The support we were able to give her at the height of the drought in 2016; cash vouchers for food, and to buy seeds for the next planting season, had been life-changing for her and her family:

“Thanks to the support given to us we now have a good harvest and a good future to look forward to.”

Seeds, rain and prayers; with Herit’s determination, she was able to produce the harvest that she and many other families just like hers, so desperately needed.

Your donations for Harvest Family Fast Day, no matter how small will go far in instilling hope, restoring dignity and producing a harvest for people in need.

Donate to the Harvest appeal

One thought on “Your harvest donations will make a lasting difference”