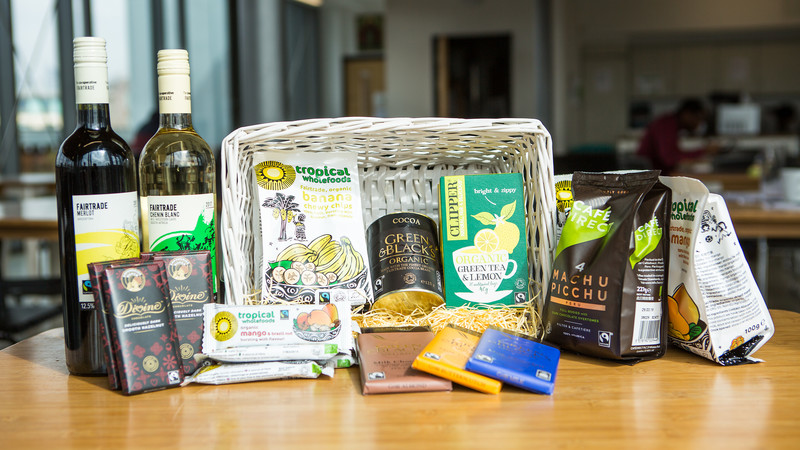 A Fairtrade hamper offered as the prize in a competition for CAFOD supporters to enter.

Daniel Hale, CAFOD’s Head of Campaigns, looks back on some of the Fairtrade Foundation’s successes – from when the organisation was established in the early 1990s, to the 25th anniversary of the Fairtrade mark this year.

When Fairtrade was established back in 1992, Mexican coffee farmers were struggling after the global coffee price halved in the late 1980s. International agreements regulating prices were undermined by new economic rules.

CAFOD joined Christian Aid, Oxfam, Traidcraft, Global Justice Now and the National Federation of Women’s Institutes to develop a logo and system that would guarantee a fairer price for producers and give confidence to consumers that they weren’t inadvertently ripping off poor people overseas.

For 15 of the last 25 years, when the global price for arabica coffee has often fallen well below the Fairtrade minimum price, it has ensured farmers can earn enough to cover at least the basic costs of sustainable production.

Read more about our Fairtrade work

Today, the foundation is the UK member of Fairtrade International which unites over 20 labelling initiatives across Europe, Japan, North America, Mexico, Australia and New Zealand, as well as networks of producer organisations from Asia, Africa, Latin America and the Caribbean.

But Fairtrade is more than just coffee. More than 1.5 million people produce Fairtrade products in more than 70 countries.

A quarter are women, helping women get the financial independence they need to lead the lives they want. And there are now more than 4,500 Fairtrade products available in the UK from coffee to gold, herbs to tea, chocolate to flowers. You can even buy Fairtrade beauty products!

All these products attract a ‘Fairtrade premium’ which is spent by producers on the things they need such as schools, teachers, even mental health support after a hurricane took out Colombian banana crops.

If you’ve wandered down your local high street recently, you’ll have seen that coffee served at Greggs is Fairtrade. You can buy Fairtrade in Lidl and Aldi too. Fairtrade isn’t a middle-class option – it’s for everyone.

Don’t forget only a tiny fraction of your coffee price is paid to the farmer. But it’s thanks to communities across the country that we’ve got this far. There are more than 600 Fairtrade parishes in England and Wales (one in three of all parishes) and Westminster is aiming to have 50% of parishes use Fairtrade.

It might seem like, after 25 years, the work is done. But this couldn’t be further from the truth.

In 2018, Sainsbury’s – the largest retailer of Fairtrade products in the world – decided to start its own ‘Fairly Traded’ label. CAFOD campaigners swung into action and petitioned store managers.

There’s more to do

Demand for Fairtrade gold outstrips supply by 500%, and plenty of other products could do with becoming Fairtrade. We need to stay radical and at the forefront of change – climate change and human rights abuses are realities for many millions of producers, and Fairtrade can help tackle both.

So 25 years on, Fairtrade is still as relevant as ever, changing lives around the world. And it’s CAFOD’s campaigners who have driven this change – take a moment to raise a glass of (Fairtrade) wine and toast another 25 years!