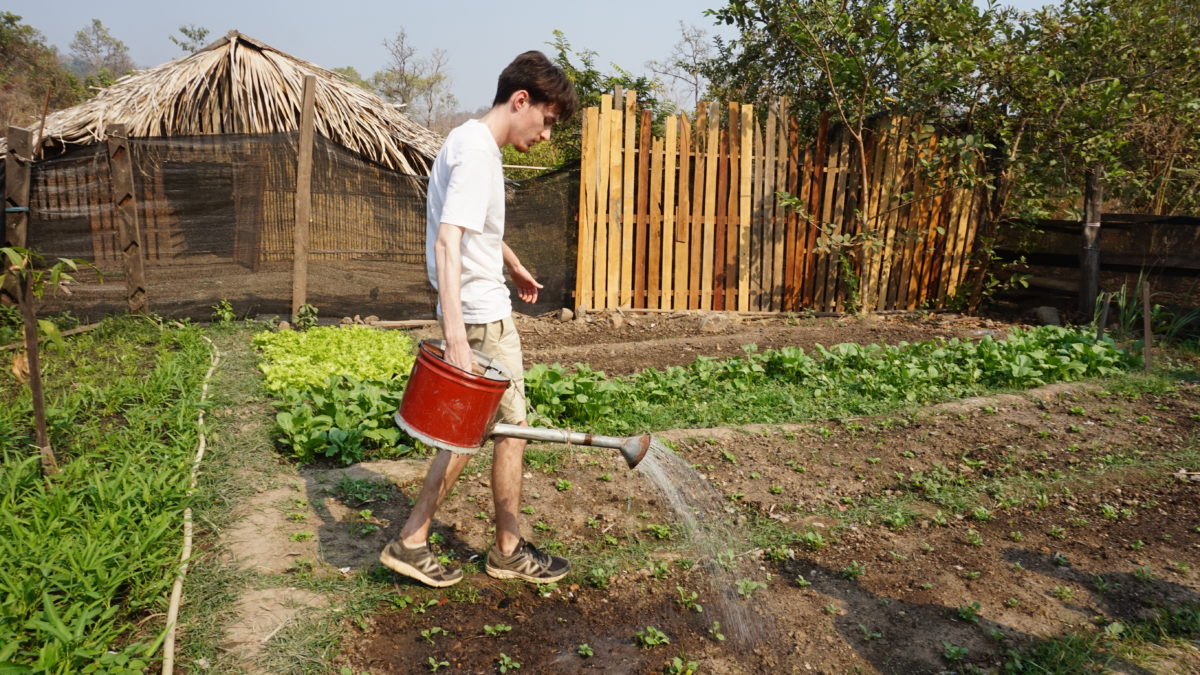 Francis Romano is a Step into the Gap volunteer, currently in Cambodia meeting some of the communities that CAFOD works alongside. Here, in part one of two, he explains the realities of rural farming and how CAFOD’s partner COCD is investing in training for a better future.

Farming in Cambodia is a lesson in harsh realities. What looks to be at first an idyll very quickly reveals itself to be a ruthless and precarious livelihood for most farmers.

A precarious life for Cambodian farmers

The term ‘precarity’ has become very popular in the west to describe the impacts of our modern economy. Not many people know that it was first used in print by activist Dorothy Day, in her publication “The Catholic Worker”.

Dorothy Day used the term ‘precarity’ to refer to the effects of a constantly changing economy and low job security, creating workers without safety nets who are constantly squeezed for all their labour.

My first impressions of Cambodian rural life were a society the opposite of this. It appears, rather than ever-changing, the situation seems to have been the same for generations. Job security is high – if you own the land you are working, you can be a farmer. But precarity has been a feature of the farming economy since the start. Job security does not entail wage security.

Seasonal variations in crops ensure that many rural families cannot truly know if they will have enough to survive next year.

A holistic approach to improving communities

There are some instances of precarity that aren’t visible until you scratch beneath the surface of rural Cambodia. Driving through Cambodia’s capital Phnom Penh, I was struck by the fact that every few hundred metres is the promise of new glass buildings, printed on the side of construction sites. Those focused on growing Cambodia’s economy and position on the international stage, it seems, value flashy foreign investment in urban centres above rural voices.

This is reflected in the lack of investment in hygiene facilities in rural communities. When we spoke to the Cambodian Organisation for Children and Development (COCD), a CAFOD local partner, they explained that one of their focuses is on training people in rural communities to build toilets.

In conversation with local community members we found that, without a toilet or latrine, they were forced to go a long way to the forest, exposing themselves to many dangers – like snake bites, violence and rape. There is also a very high risk of infection, further increased if hand washing is not common practice.

Without knowledge of hygiene concepts (known as WASH: Water Sanitation and Hygiene), villagers often do not prioritise getting a toilet. Even with this knowledge, some people are simply unable to afford the expenditure. A toilet, with subsidies, can cost around $80 – unaffordable for many farmers living hand to mouth. In this way, the economic precarity feeds into hygienic precarity.

Sign up to CAFOD’s Step into the Gap programme now

We had a fascinating conversation with the village leader Bun Sreypov who explained how she was working alongside COCD to deliver training to those in the community who need it most. I found it amazing that out of the 1,361 people she was responsible for, she knew exactly how many were in the lowest and second-lowest poverty bracket.

The lack of a social support system is a key issue of precarity, so it was great to see the local system responding to the needs of local farmers. By working with community leaders, COCD can better target and deliver its training and schemes, while the community leaders can access a large amount of support.

Enjoyed this? Read part two of Francis’ report from Cambodia