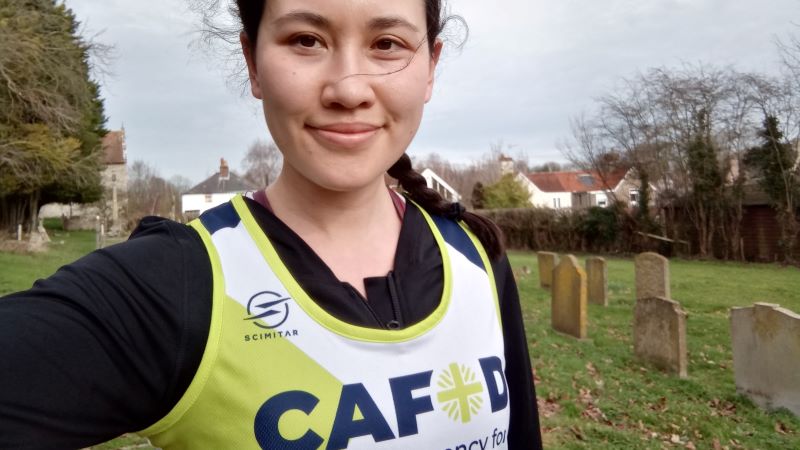 Sophia is running the Royal Parks Half Marathon for CAFOD.

Sophia had never done any fundraising up to now, or even enjoyed running, but this Lent she is doing something different to fight poverty by representing CAFOD in the Royal Parks Half Marathon.

I always used to say that I found marathons excessive. My regard for them has now developed into finding them admirable, but ultimately a distance too far for my asthmatic (and excuse-making) self. My friends tell me that a 10km is not far enough, and so a half marathon gets the Goldilocks seal of approval in being just right.

Run the Royal Parks Half Marathon for CAFOD

Why I’m running for CAFOD

This is my first time doing any sort of fundraising, and I have chosen to run for CAFOD for many reasons but I shall limit myself to naming three:

As luck would have it, I saw that CAFOD had places for the Royal Parks Half Marathon and so with great zeal I signed up. Unfortunately we have just received word that the in-person event won’t be possible on 11 April, so instead it will be a virtual half marathon complete with augmented reality crowd sound effects. Instead of the Royal Parks, I will be exploring the Crab and Winkle Way from Canterbury to Whitstable (“from cloisters to oysters”) and back again. And if the running bug keeps biting and Covid is kept at bay, I will hopefully be able to run the “actual” Royal Parks Half Marathon in October.

The good that comes from getting out of the house

The zeal didn’t stop with signing up. Contrary to my usual style, I started training a full three months prior to the run date. This is the first time that I have ever enjoyed running — perhaps it is the knowledge that I am doing it for a good cause or the sheer joy that comes with getting out of the house during lockdown.

I’m becoming quite bored with hearing myself speak about exercise, but I will say that I have been surprised at how easy it has been to fit this exercise into my days. Usually I go for three short runs during the week, one long, socially-distanced run with a friend at the weekend, and daily yoga to work on my breathing and help with muscle recovery.

While the health experts don’t lie when they say that moderate exercise makes you feel better and improves your overall wellbeing, there are nonetheless pains that come with half marathon training, from forcing yourself out of the house on bitter, wet winter days, to muscle cramp, to becoming moderately obsessed with Strava.

Change your life and transform someone else’s this Lent

Running gives you a lot of time to think, and pray, and admire the small things that might otherwise pass you by. CAFOD’s Lent campaign this year is Walk for Water, and, by virtue of my half marathon training, I will be joining in with the daily 10,000 steps per day in solidarity for those who have to walk for 10 hours per day in order to get water to live. I am sure we can all agree that no-one should have to do this.

For those of you who want to join me in getting their running shoes dirty and raising money to support CAFOD’s invaluable work, you can sign up online or support my running efforts by donating to my JustGiving page.

Sponsor Sophia in the Royal Parks Half Marathon

One thought on “Going the distance this Lent”