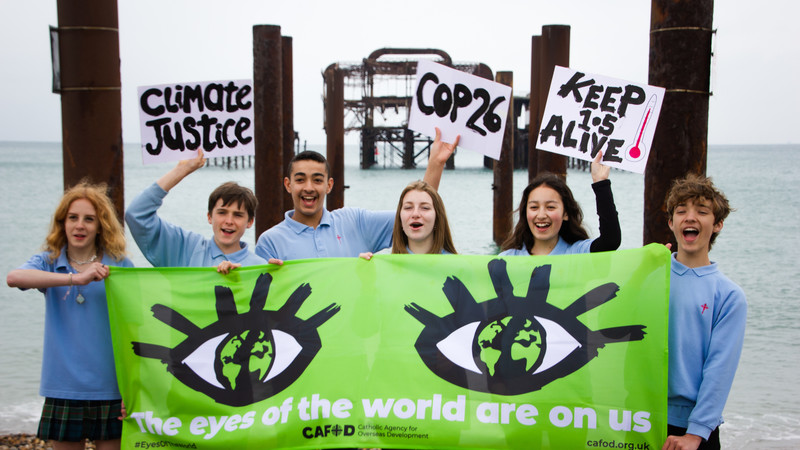 Some young campaigners remind the Government that the eyes of the world are watching!

CAFOD’s Head of Theology, Linda Jones, reflects on Saint Peter and Saint Paul and what they can teach us about leadership.

Leadership. It’s a big word. And it can be understood in lots of different ways. Think about the best leader you know. What makes them a good leader – is it their vision? Their charisma? Or perhaps their capacity to motivate, include and inspire.

St Peter certainly seems to have been someone who liked to take the lead. He sounds like he was always the one to speak up first and to jump in at the deep end before anyone else (sometimes literally!).

St Paul too. He’s well-known through the letters that he wrote to different communities of early Christians. But he also visited them often, offering advice and support. He encouraged them to become real communities – made up of people who might be very diverse, but who aimed to live together in unity.

Leadership that is lacking

Pope Francis often mentions the need for good leadership. He is critical about failures in global leadership, especially failures that have led to insufficient action on the climate crisis.

He says, ‘Never have we so hurt and mistreated our common home as we have in the last two hundred years. Yet we are called to be instruments of God our Father, so that our planet might be what he desired when he created it and correspond with his plan for peace, beauty and fullness…We lack leadership capable of striking out on new paths and meeting the needs of the present with concern for all and without prejudice towards coming generations.’ (Laudato Si’)

Reflect on and respond to Laudato Si’ with our resources

This year the UK hosts the UN climate conference – COP26 – and we have opportunities to step up as a country and do more about the climate crisis. It’s a time for positive political leadership. Aisha Dodwell, CAFOD’s Head of Campaigns, says, “We need wealthy nations to significantly step up their spending on climate finance for the countries and communities struggling to deal with the effects of climate change. We also need all wealthy nations to immediately end support for new fossil fuels, both domestically and internationally.”

No one beyond reach

But leadership is not just for political leaders, CEOs of big companies, and global conferences. St Peter and St Paul didn’t address the crowds with management speak, or glossy vision statements. They built relationships and they supported communities to grow and flourish.

One of the things I learned during the different COVID lockdowns was the importance of my local networks. It gave me hope to see how many people stepped forward and said, ‘What can I do to help?’ Maybe your neighbour needed some shopping and you offered to get something in for them. Maybe someone local lost their job and you stepped in to make sure their family had enough to eat. In this way, the COVID pandemic turned society on its head.

We need this kind of leadership again, now that we have access to COVID vaccines. Rather than seeking wealth and economic gain, Pope Francis urges us to lead the way in putting the needs of the poorest communities first.

‘The preferential option for the poor…inspires us to conceive of and design an economy where people, and especially the poorest, are at the centre. And it also encourages us to plan the treatment of viruses by prioritising those who are most in need. It would be sad if, for the vaccine for Covid-19, priority were to be given to the richest! It would be sad if this vaccine were to become the property of this nation or another, rather than universal and for all. And what a scandal it would be if all the economic assistance we are observing – most of it with public money – were to focus on rescuing those industries that do not contribute to the inclusion of the excluded, the promotion of the least, the common good or the care of creation. There are criteria for choosing which industries should be helped: those which contribute to the inclusion of the excluded, to the promotion of the last, to the common good and the care of creation. Four criteria.’

Urge private banks to cancel debts for developing countries and free up money for vaccines.

How can we be leaders?

Leadership is not all about other people. How can we each exercise leadership in our own lives? Rather than blindly following someone who appears to be strong and confident, who talks a good talk, it is for each of us to contribute what we can for the good of all. Each and every one of us has something to offer. As St Paul writes to the Romans,