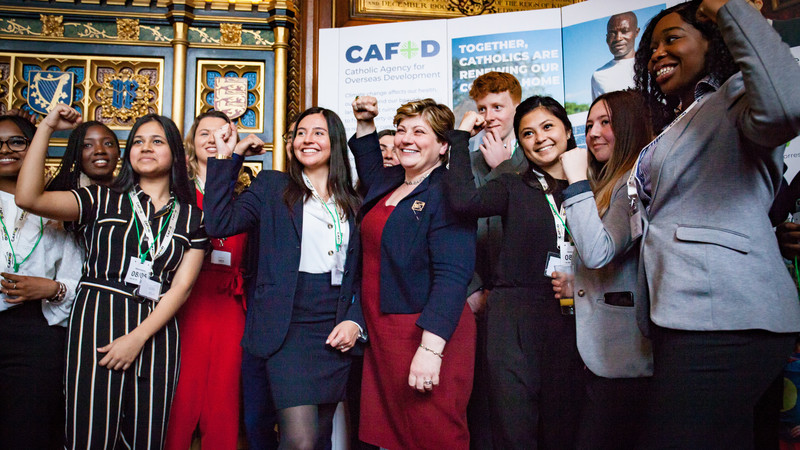 We asked three Catholics to share their views on faith, politics and campaigning. Here’s what they said.

END_OF_DOCUMENT_TOKEN_TO_BE_REPLACED

Last month Julie Cox from St John Fisher Parish, Rochester, travelled to Cameroon to visit Sr Annette, who shares her deep conviction to live simply, sustainably and in solidarity with the poor. Here she shares her experience of “ecological conversion”.

In 2011, when the livesimply Parish Award Scheme was launched by CAFOD, I heard Fr. Sean McDonagh SSC speak passionately about the integrity of Creation and the impacts of climate change.  A seed was sown and I continued to attend subsequent livesimply meetings, learning more about the connection between our Christian faith and human-ecology.

During a Creation-focused meeting at the Franciscan Study Centre, Canterbury, I had the good fortune to meet a Franciscan Sister from Cameroon, Sr Annette Tangwa TSSF. We became close friends, sharing a passion to restore Creation.

Find out more about becoming a liveSimply parish

I had the great privilege of reconnecting with my dear friend Sr Annette last November when I travelled to Cameroon. What struck me when I first arrived in this central African country was the warmth, openness and receptivity of the Cameroonian people. It was a truly wonderful experience to be among a rural community centred on the parish of the Sacred Heart, Shisong.

END_OF_DOCUMENT_TOKEN_TO_BE_REPLACED

Ashley Ralston is a parishioner of Our Lady Queen of Peace, Adur Valley. He was part of a group looking at our new encyclical study guide. Here he shares his insight into being a Catholic activist and the importance of applying the lens of Scritpure to campaigning.

Many years ago, I went to a talk given by the late Gerard Hughes SJ (author of God of Surprises) about putting theology into practice, including the pitfalls that we encounter. For me, as an activist, it proved to be useful, because grounding your issue in sound theology, means the activism itself becomes like a prayer to the supreme Creator. That is doing theology.

So it is with Catholic Social Teaching, from Rerum Novarum to the present time, the theological input underpinning the ‘the sign of the times’ enables us to read our world through the lens of Scripture. Laudato Si’ continues this in a very accessible way.

END_OF_DOCUMENT_TOKEN_TO_BE_REPLACED

Yesterday the presidents of all the Continental Associations of Bishops’ Conferences released a statement calling on world leaders to limit global temperature increase and protect vulnerable communities from climate change. We hear firsthand from the Prime Minister of Pacific Island Tuvalu – one of the places most impacted by climate change – on how extreme weather is affecting his community and what must be agreed at the Paris climate talks in December.

When Cyclone Pam – a maximum category 5 storm – hit us in March this year, we had waves up to five metres high. Crops were ruined, livestock swept away and an enormous amount of infrastructure, including a hospital, was destroyed. Nearly half of our people suffered losses, and we are only beginning to recover. We continue to seek support from the international community to rebuild.

It is clear. The science tells us that these severe events are caused by human interference with the climate. As Pope Francis wrote in his recent encyclical, “Climate change is a global problem, with grave implications.” We, in low-lying island states such as Tuvalu, are the first to feel the effects, and have the most to gain or lose from the new international climate change agreement to be concluded in Paris at the end of the year.

END_OF_DOCUMENT_TOKEN_TO_BE_REPLACED

CAFOD’s Head of Campaigns, Sophie Dodgeon, gives us the lowdown on what to watch out for in the year ahead – and explains why 2015 is such a crucial year for action on climate change.

1. It’s a year to say goodbye. In 2015, we reach the end of both the Kyoto Protocol and the Millennium Development Goals. Both are UN processes which set targets for governments to meet.

The Kyoto Protocol covered carbon emissions, and the Millennium Development Goals gave a global framework to measure progress on ending poverty – from improving access to education to reducing the number of women dying in childbirth.

2. It’s a year to make a new start. The end of past agreements means the pressure is on this year to set new goals and agreements to spur us on into the future.

In September, all eyes will be on New York, where there will be a major UN summit to agree a set of new Sustainable Development Goals. How far climate change is recognised in the new goals is still being negotiated. CAFOD is already involved, getting our overseas partners’ concerns heard at the highest level.

Next is Paris. By the end of 2015, all countries need to agree how they will cut carbon emissions and what collective action they will take to respond to the impact of changes in the climate (for instance, what funding they will provide to enable developing countries to cope with adapting to change).

Each country will make a pledge saying what they will do about climate change. The UK will pledge as part of the European Union.

Discussions have already started; some of the main pledges are expected to be agreed by March. The global deal itself needs to be thrashed out at a fortnight-long meeting called the COP 21 (Conference of the Parties) in Paris in December 2015.

For the sake of the communities that we work with, the deal needs to be ambitious, binding and fair to the poorest people.

Take action today and email party leaders telling them why you care about climate change.