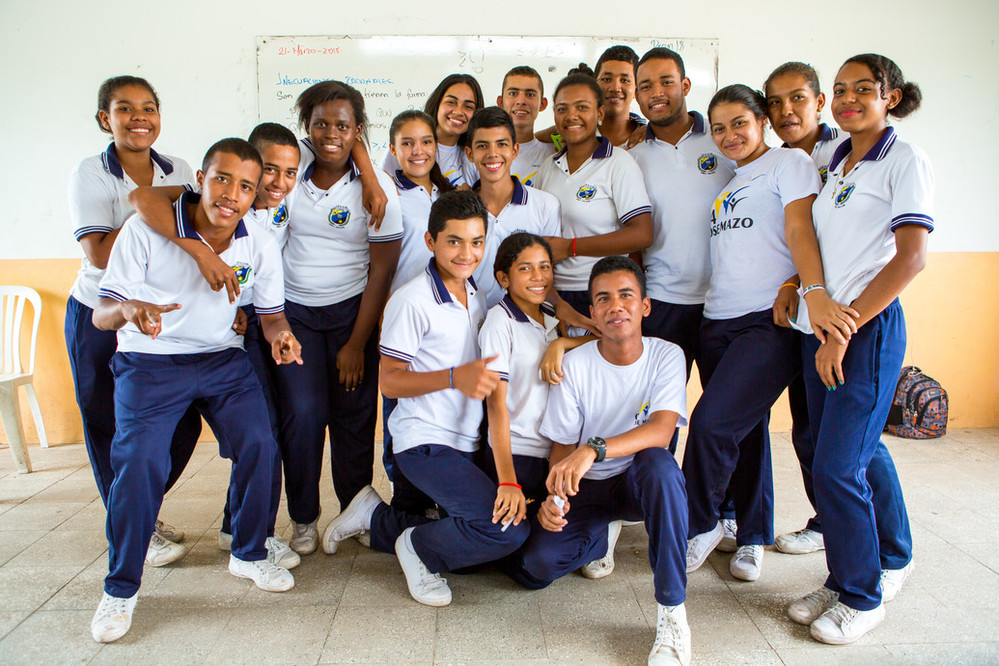 Chris Knowles works in our education team. In this blog he explains why young leadership is essential to CAFOD’s work.

“We have a responsibility towards our country, we are the present”. Rosana

Read about our latest Hands On project

END_OF_DOCUMENT_TOKEN_TO_BE_REPLACED

Olwen Maynard has been working on CAFOD’s Middle East Desk since 2006. Here, she looks back at what the generosity of CAFOD’s supporters made possible in the two years following the last major military offensive.

A cup of clean water

Gaza’s tap water is heavily contaminated and dangerous, but buying bottled water is expensive, and can mean having to cut down on food. CAFOD has been working since 2013 with Islamic Relief to provide Reverse Osmosis Units to poor women-headed families, so they can filter their water and make it safe for drinking and cooking. Over the two years since the 2014 airstrikes, which caused massive further damage to the water supply infrastructure, the project has been extended to another 220 families and also to 65 kindergartens, providing clean water for thousands of children, along with hygiene education to help them stay healthy.

END_OF_DOCUMENT_TOKEN_TO_BE_REPLACED

In the past fortnight a time machine took me back to the late 1980s. I was sitting watching my favourite tea-time programme: a re-run, in glorious Technicolor, of a McCarthy-era, American sci-fi series.

The meek, unsuspecting earthlings were being duped again, by the cold, cunning aliens. More invaders had landed in their town and were taking over. But the only people that could see this were a small boy who kept shouting for people to listen…and me.

Send a message of hope to refugees today END_OF_DOCUMENT_TOKEN_TO_BE_REPLACED

The idea is to take a pop-up studio and set it up in some of the camps and take family portraits of Syrian refugees, with empty chairs symbolising the loved ones they have left behind or lost due to this horrific six-year war. END_OF_DOCUMENT_TOKEN_TO_BE_REPLACED

Tabitha Ross is a CAFOD freelancer who works in Lebanon. On International Day of Peace she tells us about Eman and Hanigal – two mothers who have been forced to leave their homes in Syria because of the ongoing conflict.

Sitting on a blanket on the grass in the warmth of the sun, Eman looks shell-shocked to find herself in Lebanon, safe from the fear of violence for the first time in nearly four years. When I meet her, she has been here just over two weeks.

Despite coming from Daraa, the region of Syria where the uprising first began on 15 March 2011, and which has seen bitter fighting and bombing, Eman only decided to flee the country this year.

I ask what was the final straw, after so much suffering, that pushed her to leave. With tears in her eyes she said: “At the start of the war my husband disappeared, so I didn’t want to leave because I had the idea that he would come back. But in February my house was bombed and destroyed, so I decided to come here.”

Eman tells me how she and her four children spent three days on the road from Daraa to Damascus. Reaching the capital, they spent two nights sleeping in the freezing street. Finally a taxi driver took pity on them and brought them here to Lebanon, where she is staying with a cousin in an unfinished breeze block construction in the Bekaa Valley.

“I feel ashamed because I have no money and the family that I am staying with have barely any money either. Maybe we eat one day and then for three days we do not, because we don’t have the money to buy food,” she said. END_OF_DOCUMENT_TOKEN_TO_BE_REPLACED

In Syria, it’s traditionally a source of great pride to be the mother of sons, and Ghossoun was rightly proud of her five boys. Brought up on a farm in the Homs region of Syria, each one grew up and went into the army when he left home – a stable and respectable career at the time. Ghossoun and her husband were left at home with their youngest, their only girl.

Then Syria descended into war.

“We didn’t want to participate in the war. We were neither with the government nor against it. But unfortunately we were not allowed that option,” said Ghossoun.

Because they were in the army, her sons were targeted as government supporters, although Ghossoun says their choice of career was not a political statement. The threats got worse, and one terrible day, Ghossoun’s husband was murdered as he worked on the farm.

Fearing for her children’s lives, Ghossoun fled to Lebanon with her family.

This made her sons military deserters, and now they are in trouble with both the Syrian government and its opponents. “We told the authorities that their father was killed and their lives were threatened, but of course they didn’t believe us,” she said.

They have also been pursued to Lebanon by the group that killed her husband, and have had to move around several times. Now they live in hiding, only leaving the house when absolutely necessary. END_OF_DOCUMENT_TOKEN_TO_BE_REPLACED