Orla, from London, recently spent a week volunteering at the CAFOD Romero House office. Find out why she thinks young people care about climate change, and who inspired her during her time with the CAFOD team.

As an internet-savvy teenager, I have the sort of constant access, 24 hours a day, to the world via social media that my parents never even dreamt of. It’s all there, virtually, and for better or worse, at the touch of a button. News is readily available, telling me stories from half way across the world that I share while sitting on my sofa at home.

For my generation, therefore, the world seems like a smaller place than ever before. And that is reinforced by living and going to school in London. I am part of one of the most ethnically diverse communities anywhere on the globe. In my year group of 96 at my Catholic school, I am one of only four whose parents and grandparents were born and brought up in the UK. So I can learn about such a variety of different cultures by just talking to the person sitting next to me in class.

Speaking Up on 17 June

When looking around my class I know of many members of my friendship group who feel too swept up in the shallowness and unfulfilment that comes with social media. One of the integral parts of my Catholic school is to reach out and help others through charity work. Therefore I know of so many of my peers who seized the opportunity to take part in the Speak Up for the Love of… climate lobby on the 17 June.

Read about the lobby

I believe that young people in our society often get the reputation of being uncaring delinquents. However, I speak for many my age when I stress that being a teenager in a world where suffering is so present, where the future of the planet we have to grow up in seems to be spiralling out of control, where the effects of climate change are already being seen, really terrifies us and leaves us feeling powerless.

END_OF_DOCUMENT_TOKEN_TO_BE_REPLACED

Denise is Diocesan Manager in Brentwood. She visited El Salvador in 2004 for the 15th Anniversary of the Martyrs of El Salvador. To mark the beatification of Blessed Oscar Romero, she tells us how his legacy lives on in the people of El Salvador.

When I first knew I would be visiting El Salvador I read a few books about the country – most recalling the conflict and the work of Romero and the Jesuit priests. I felt I was concentrating on the past and not finding out about the country now. It soon became clear that the conflict and Romero is still so entwined in daily life, that you couldn’t split the past from the present or the future.

Download prayers to celebrate the life of Blessed Oscar Romero

This is an excerpt from my diary, reflecting on a visit to where Romero was assassinated, the chapel of The Hospital of the Divine Providence

“We are welcomed into the small museum housed in the rooms Romero used when staying at the hospital. Shown around by a sister who had ministered to Romero after he was shot, it is sobering to meet people who so nearly lost their lives but for fate and to be part of history. END_OF_DOCUMENT_TOKEN_TO_BE_REPLACED 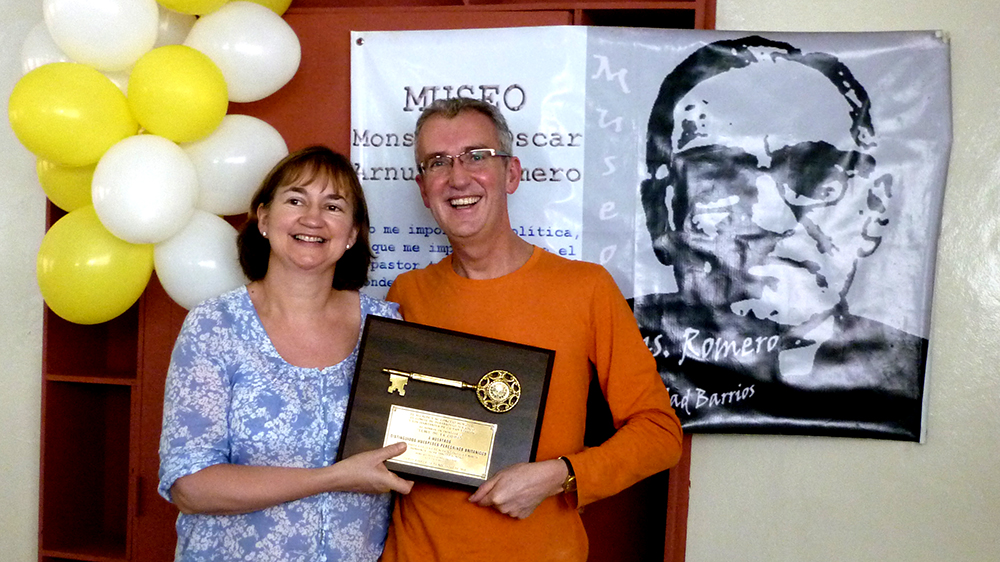 I am delighted that the Church has beatified Oscar Romero. He is an inspirational Christian Martyr of my life time and an authentic voice of our Church having a real concern for the poor.

He was a true witness to Jesus’s teaching for us to speak out for justice in the beatitudes, when he said in Matthew 5:6. “Blessed are those who hunger and thirst for righteousness…and when people speak all types of criticisms of you on my account”

Download prayers to celebrate the beatification of Blessed Oscar Romero

Romero spoke out about the injustices and killings in El Salvador during his time as Archbishop from 1977 to 1980. In doing so, Romero systematic undermined the rich and powerful and faced death threats to stop him speaking out.

END_OF_DOCUMENT_TOKEN_TO_BE_REPLACED

Father Rob Esdaile is the Parish Priest of Our Lady of Lourdes in Surrey. He visited El Salvador in 1999 and shares his reflections on what Blessed Oscar Romero can teach us today.

I had the privilege of going to El Salvador early in 1999 in the company of Father John Medcalf, a fellow diocesan priest (who had himself worked in both El Salvador and Nicaragua). John had been invited to observe the presidential elections and thought it would do me good to go along.

Even 19 years after the murder of El Monseñor and 7 years after the end of El Salvador’s Civil War, the wounds caused by the violence he denounced lay just below the surface.  My visit was punctuated by encounters with the bereaved, with witnesses to atrocity, and with places stained still with memories of blood.

But I also visited the hospital chapel where Romero died saying Mass and the little bungalow next door where he lived in utter simplicity.  And I prayed at his tomb in the Cathedral of San Salvador, where it became apparent that already the people understood that he was their saint – San Romero.

As I reflect on the story of the Archbishop 35 years after his Martyrdom in my comfortable, wealthy, beautiful, non-violent suburban London parish, three things strike me.

END_OF_DOCUMENT_TOKEN_TO_BE_REPLACED

Important progress was made in 2014. CAFOD’s MP Correspondents* played a key part by asking the Prime Minister to show his commitment to climate change by attending a special UN summit hosted by the UN Secretary General Ban Ki-moon – and he did! At the summit he echoed CAFOD’s call that the UK should “help those who need it, particularly the poorest and most vulnerable”. END_OF_DOCUMENT_TOKEN_TO_BE_REPLACED

CAFOD’s Step into the Gap volunteers in Zimbabwe have come to the end of their visit. Here are their thoughts as they head home:

We’ve reached the final day of an amazing trip, where we’ve been immersed in Zimbabwean culture, met so many inspirational people and have so much we can’t wait to share back with communities in England and Wales. As we prepare to catch our flight home, here are just some of our reflections.

Wow. Looking back through my journal of the past three and a bit weeks, we have been so privileged to meet so many amazing people and witness such a wide range of CAFOD supported projects. Although the projects have been varied, a reoccurring theme has been prevalent throughout – the overwhelmingly strong sense of “togetherness” and community here in Zimbabwe. END_OF_DOCUMENT_TOKEN_TO_BE_REPLACED

CAFOD’s gap year volunteers in Zimbabwe have been learning about our work supporting people with HIV and AIDS:

HIV and AIDS is something we’re all aware of and have heard about, but until we were immersed in the reality of Zimbabwe, we could not truly appreciate the impact it has on the individuals affected, their livelihoods, families and communities. However, within a situation which can sometimes seem hopeless and desperate, we have been truly inspired by the work of the Mashambanzou Care Trust.

Find out more about CAFOD’s HIV and AIDS work

Mashambanzou is a CAFOD partner which ultimately aims to see HIV-free communities through empowerment, care and support. They work mainly in poor, overcrowded areas of Harare, the capital of Zimbabwe. Over the past week we have witnessed many incredible projects, such as a children’s day care centre, child protection clubs in schools, and home visits to people living with HIV. END_OF_DOCUMENT_TOKEN_TO_BE_REPLACED

Bernadette is one of CAFOD‘s Step into the Gap volunteers. She’s currently working as a chaplain at St. Mary’s Catholic Academy in Blackpool and is visiting CAFOD partners in Nicaragua.

Hola from Nicaragua. There is so much I want to share with you already and I think the easiest way is to give you an insight into the trip so far to give people a whole view of the experience. So here goes, when I said in my pre blog about looking forward to the opportunity to see the work that CAFOD is involved in I never realised how much I would experience so quickly.

Find out about Step into the Gap

On our first full day in Managua, the capital city, we headed out as a group to meet the Central America CAFOD team based here in Managua. This was an opportunity to find out about what the team here focuses on, not only in Nicaragua but throughout Central America. We spent time looking at various aspects such as the work around gender and HIV, livelihoods, human rights and weather.

END_OF_DOCUMENT_TOKEN_TO_BE_REPLACED

So many people have made an extraordinary effort to get us to this point: the local health workers who selflessly stepped up to care for the sick and dying, 221 of whom here in Sierra Leone lost their lives to Ebola; the brave men and women who volunteered to join burial teams and dig graves, every day facing the strain of grieving families; and the people across England and Wales who’ve generously donated to CAFOD. END_OF_DOCUMENT_TOKEN_TO_BE_REPLACED