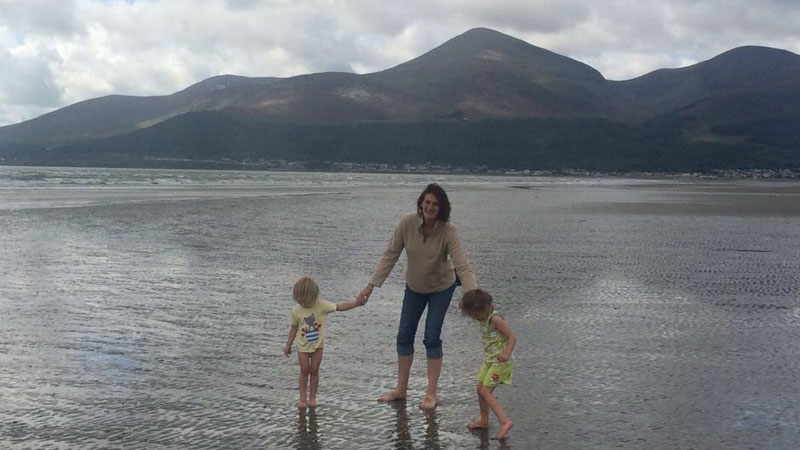 This week Claire Bolt is helping her daughter prepare to start school. In this blog she talks about her hopes for the year ahead.

My eldest daughter is starting school in September. Honestly, despite the‘time flies’ warnings you get from elderly aunts, I can’t quite believe it. As the start date draws nearer, I’m remembering Kathleen’s baby stage with glee (sleepless nights, what sleepless nights?), watching with pride as she runs around the park, or grins down at me when she makes it to the top of the climbing frame. She’s only little so what am I doing buying pinafores and black shoes and hair bands to match her uniform?

Getting ready to go back to school? Check out our top tips for teachers

And then comes the panic. How on earth will we get out of the house on time every morning when just getting dressed or having breakfast can take the best part of an hour? What if she doesn’t like her teacher? Will she make friends? Deep breath. Reception, here we come.

END_OF_DOCUMENT_TOKEN_TO_BE_REPLACED

Catherine Gorman from our Theology Programme reflects on the Doors of Mercy, where they can be seen in our world and how we can open them to others. 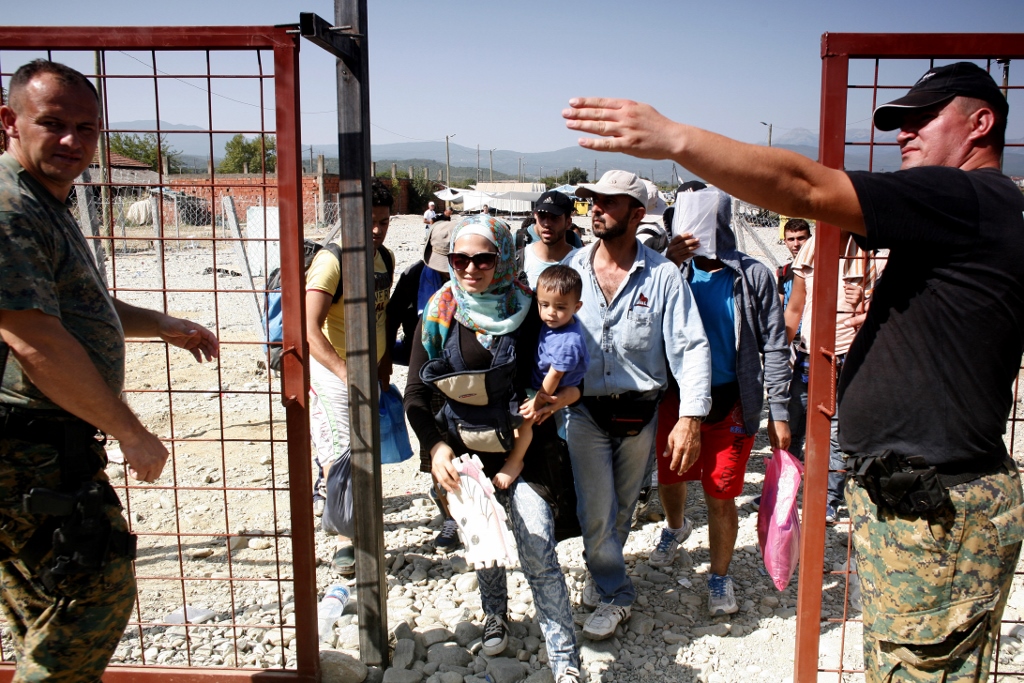 A couple of weeks’ ago I walked through the Door of Mercy at St George’s Cathedral, Southwark with CAFOD colleagues from all around the country. We were praying for refugees and migrants, forced to leave their homes in search of a better life. And as we heard the stories of our brothers and sisters from around the world, intertwined with Scripture, Catholic Social Teaching and prayers, we were moved – imagining ourselves in their shoes, and recognising the need for God’s mercy in our world.

As Pope Francis has said: “By crossing the threshold of the Holy Door, we will find the strength to embrace God’s mercy and dedicate ourselves to being merciful with others as the Father has been with us.” (Misericordiae Vultus #14)

As we passed through the door, I had a real sense that I and my colleagues were truly (re)committing ourselves to share God’s mercy with others, a sense that has stayed with me since.

END_OF_DOCUMENT_TOKEN_TO_BE_REPLACED 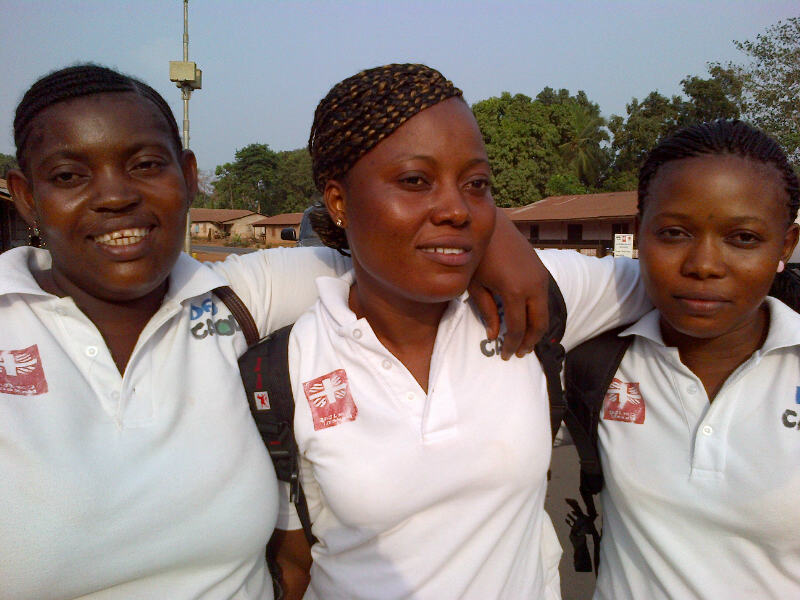 In her second blog from Sierra Leone, Nana Anto-Awuakye writes about a volunteer burial team on the front line of the fight against Ebola.

We leave behind the bustle of Sierra Leone’s capital Freetown, where the Ebola prevention posters plastered across all available wall space, and on cars and motorbikes, are now looking tattered and faded.

The landscape changes from precarious half-built houses perched on the hillsides surrounding the city, to lush green savannah grasslands.

We are heading to Kambia in the north-east of the country, a district that became a hotspot as the Ebola epidemic gripped the country last year. Sandwiched between the urban district of Port Loko to the south and the border with Guinea – where the virus started – to the north, the odds seem stacked against this unassuming town.

But an amazing partnership has developed here between the Sierra Leonean Ministry of Health, local volunteers – including teachers, students and farmers – and CAFOD, to form the Safe and Dignified Burial team of Kambia. Together they have refused to be overwhelmed by the odds stacked against them.

On a piece of land the size of two football pitches is an important part of the operation – the Kambia Ebola Response Fleet site, managed by CAFOD and its local partner Caritas Makeni. END_OF_DOCUMENT_TOKEN_TO_BE_REPLACED

Eight years after her last visit, Nana Anto-Awuakye from CAFOD’s Communications team writes about returning to Sierra Leone to meet people on the front line in the struggle against the Ebola virus.

Before I left London, my colleague Amie came up to my desk and gave me a goodbye hug, saying: “We Sierra Leoneans love to hug.”

It has been difficult for people in Sierra Leone to hug over the last few months. Even though the Ebola virus has now been contained in most parts of the country, the “no touch” policy is still in place. When I arrive, I will have to check my automatic instinct to shake people’s hands, or to put a comforting hand on people’s shoulders when listening to their stories.

I first visited Sierra Leone in 2007, several years after the country’s devastating civil war – a conflict in which tens of thousands of people died, and in which the brutal hacking off of limbs was all too common.

In the capital Freetown, watching the sunset turn the sky auburn over the city’s beautiful golden beaches, I remember finding it hard to imagine that this had once been a place of fear and bloodshed. At the time, everyone I met talked about “not wanting to go back”. They were confident in the peace that had been secured, and spoke only of a future of reconciliation and development.

Travelling to Kenema in the Eastern Province, I remember being greeted by the rolling green hills of Kambui, and in the town centre by whole streets lined with diamond buyers’ shops. I learned that Kenema was an important agricultural market town, as well as the centre for the timber industry and for the production of coffee and palm oil.

Epicentre of the virus

Last year Kenema was one of the areas at the epicentre of the Ebola virus. It was effectively locked down. Blockades on the main road ensured that no one entered or left the district, decimating its once thriving economy.

END_OF_DOCUMENT_TOKEN_TO_BE_REPLACED

I’m a bit of a pessimist. A ‘glass half-empty’ kind of girl. I often expect the worst, and am frequently chasing whatever I think will make me happy. For example, “I’ll be really happy when the summer arrives and winter’s over” and then, “I hate the city in the summer, I can’t wait for it to be over so that I can wrap up warm and celebrate Christmas”. Always chasing. Waiting to reach the other side where the grass will undoubtedly be greener.

My colleague Nana has the most beautiful smile. When I arrive at the office in the morning, one look from her can lift my spirits no end. Nana’s an optimist. A ‘glass half-full’ kind of girl. I’ve been trying to reflect more during Lent and when I decided to write a blog on International day of Happiness as part of my Hope Journal, I asked Nana to describe what happiness means to her and how she maintains her sunny disposition.

END_OF_DOCUMENT_TOKEN_TO_BE_REPLACED

So many people have made an extraordinary effort to get us to this point: the local health workers who selflessly stepped up to care for the sick and dying, 221 of whom here in Sierra Leone lost their lives to Ebola; the brave men and women who volunteered to join burial teams and dig graves, every day facing the strain of grieving families; and the people across England and Wales who’ve generously donated to CAFOD. END_OF_DOCUMENT_TOKEN_TO_BE_REPLACED