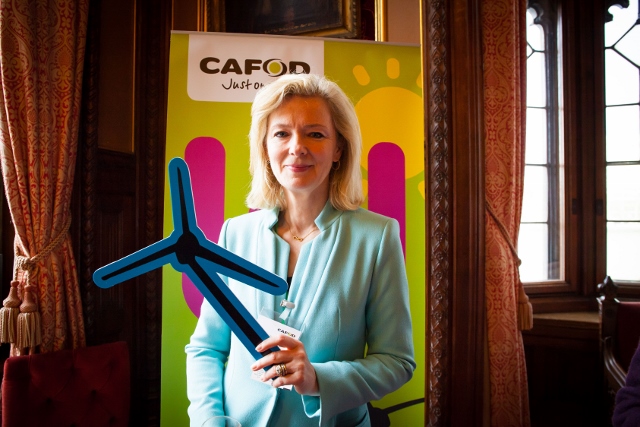 Gillie Drinkall has been volunteering with CAFOD for nine years. About two years ago she started writing to her MP about CAFOD campaigns. Back then she joined a group of CAFOD supporters visiting parliament, and heard from  Nick Hurd MP about the impact of our campaigning. Here she tells us that story.

I first joined CAFOD as an Education Volunteer. That decision was based as much on proximity to CAFOD’s headquarters as any spiritual calling. But, within weeks of me joining, CAFOD had moved from Brixton, near my home, slightly further afield to Romero House. Furthermore, as an Education Volunteer I found myself, unsurprisingly, in schools rather than the office.

Seven hugely enjoyable years later, I now, in addition to the schools volunteering, spend one day a week helping the Campaigns Team at Romero House. It was here that, slightly inadvertently, I became an MP Correspondent (MPC).

Find out how you could become an MP Correspondent

My first letter to my MP

I was asked to draft a letter about the World Humanitarian Summit for MP Correpondents to use. Having written the letter, I decided that I should actually send it to my MP and call myself an MPC too!

That was how, this week, I found myself attending the MP Correspondents’ annual parliamentary reception at the House of Commons. Here I heard first-hand why my action was, and continues to be, important.

The reception was held in the Speaker’s State Rooms and was all grandeur and elegance. I had visited the House of Commons recently with a CAFOD group. We heard a debate on Laudato Si’ and another one on the Government’s intended contribution to COP21 in Paris. Unfortunately such was the length of the preamble in the debating chamber I wasn’t able to remain long enough to hear the actual debate.

Last night I was again reminded how eloquent parliamentarians can be. However,  as long as the speeches were, it was rewarding to hear how valued  CAFOD is. CAFOD is not only value as an organisation (“sheer quality and experience …… an unsurpassed advocate for human rights”) but also CAFOD supporters who are MPCs.

A number of speakers emphasised that letters from constituents were of huge value to draw attention to something the MP didn’t know or informing the MP of something in more detail.

You too can become an MP. Sign up and make a difference

Such a letter impels the MP to take notice of his or her moral conscience. It reminds them they do not have the right to turn away and that they have an obligation to use their vote to do the right thing!

We heard that the BBC, after receiving eight letters on a particular issue, was obliged to take that issue seriously. Similarly MPs will (indeed, have to) respond to a constituent’s letter. The more heart-felt and personal the letter the better.

The MPs emphasised that development issues are genuinely cross-party issues. We heard about a cross-party/CAFOD visit to Kenya and listened to Nick Hurd MP saying power to the poorest people is “so obviously the right thing to do”.

And, yes, that first letter that started me off as an MPC did get an answer from my MP, in some detail. That’s only the beginning – she will be hearing from me again.