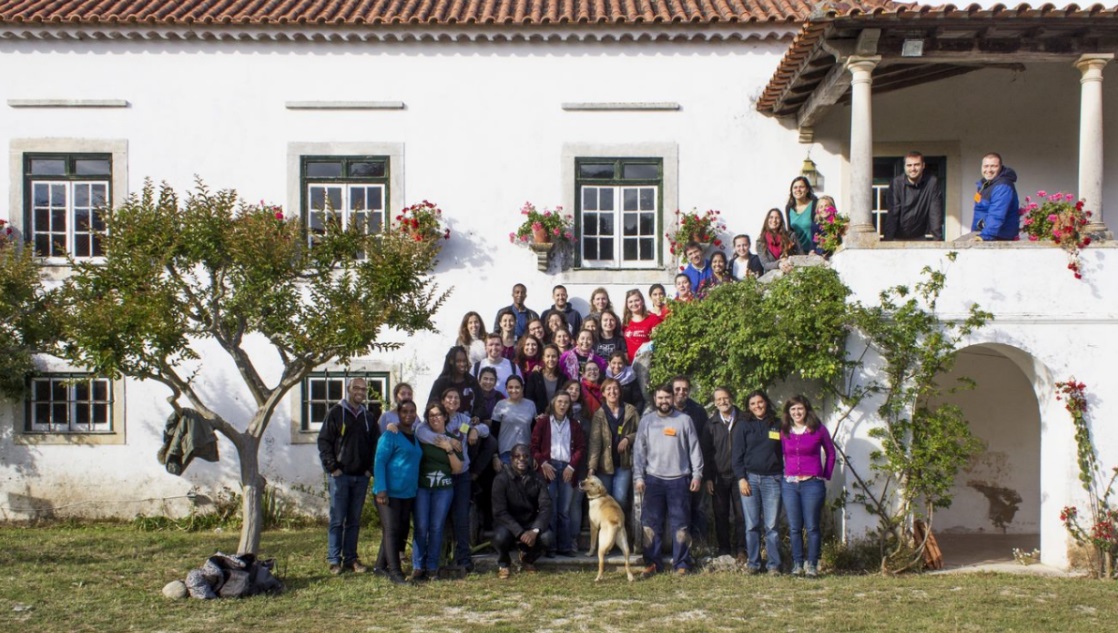 Sandra with other members of the group from around the world.

Sandra Iheanacho, a CAFOD volunteer from Westminster diocese, recently travelled to Fatima, Portugal to attend a sustainability camp inspired by Laudato Si’. There she saw Laudato Si’  brought to life and here she talks about her experiences and how every community can get involved.

The week of the 100th anniversary of our Lady of Fatima had finally arrived. I was on my way to meet up with my fellow ‘Climate Champion’ volunteers from CAFOD to journey to Lisbon, Portugal together. As we all gathered at Gatwick airport, we took the time to discuss over breakfast our expectations, worries, and fears. Our questions ranged from ‘what will the Casa Velha farm be like?’ to ‘why was a swimming costume needed?’

Arriving in Lisbon, we were welcomed by palm trees, clear skies, and heat, but it was not long before we ventured outside, and were hit by harsh wind and rain that quickly reminded us of why we were here; to tackle Laudato Si’.

Find out more about Laudato Si

Once we had finally reached Casa Velha we were pleased to discover that the week ahead would embody spirituality, community, and most of all, a 17km pilgrimage to Fatima.

We began each day on the farm with Mass, which introduced the theme for the day. For instance, on the second day, the first reading was from the Acts of the Apostles. It emphasised that in a community we all have different roles to perform in order to do the work of God. Additionally, Father José delved deeper into the book of Genesis to emphasise that yes, ‘man was made to dominate the earth’, but that also ‘man was made to care for the earth’, therefore as a community, we must work alongside all creation to allow our children to blossom in it.

On the third day, our liturgy tied closely with the theme of ecological conversion. By focusing on the Gospel of Saint John we were able to reflect on the passage where Mary Magdalene had discovered that Jesus was no longer in the tomb. Although Jesus had appeared behind her asking some questions, Mary Magdalene still could not recognise his voice, it was only when Jesus addressed her by name; ‘Mary’, that she underwent a conversion.

Following this, each of us ventured outside to find a piece of nature that symbolised our conversion. For me, I chose a seed. It signified a new beginning that would blossom and bear fruit for those in my community.

We were also able to engage in a ‘food for thought’ activity at lunch. Having been divided into three teams, we worked together to grade our meal on its energy efficiency, environmental impact, nutritional and social value. Through this activity, we were able to critically analyse the supply chain, and gain a deeper appreciation of the food we eat.

To solidify our strength as a community, we devised an agreement. This Casa Velha ‘treaty’ focused on a variety of aspects including combatting injustice, working with young people, ecological conversion, establishing a community and more. As we signed the agreement it was clear that, despite our differences, we were able to work together for the common good.

It was 8am on the fourth day and our 17km pilgrimage to Fatima had finally arrived. As we set off, we were joined by an extra 200 people, each with different stories to tell. One man informed us that his great aunt had experienced the miracle at Fatima in 1917, and now it was his time to follow in her footsteps.

By the 12th kilometre my pilgrimage had become more challenging; I had twisted my ankle. However, what was encouraging was the love and support from my Casa Velha family. They not only held my bag to reduce the load, waited for me when in need of a break, but even comforted me when experiencing a range of emotions; the sign of a true, loving, community.

Once we had arrived in the centre of Fatima, we were amazed to see and hear the excitement from hundreds of thousands of people from all over the world. Like us, they had journeyed to welcome Pope Francis and push for Laudato Si’. But overall, what was incredible was the way the Pope commanded silence during the vigil and the thousands of lights that lit up Fatima.

Download a CAFOD prayer, written by one of our volunteers

The time had come for us to leave Fatima and journey back to Casa Velha to say our last goodbyes. On the coach ride back, it was clear that each person was in deep thought; reflecting on all that had occurred throughout the week. For me, I dwelled on how spirituality and being proactive could achieve so much in a short space of time. Also, I began to think about what I would do when I returned to the UK; conducting workshops with young people on living sustainably and cutting down on materialistic goods.

As we reached Casa Velha, we formed a circle where each person proclaimed one word that could sum up their experience. Words ranged from ‘love’ to ‘exhaustion’, and even ‘sacrifice’. But for me, the word was ‘family’. Despite not knowing each other beforehand, we worked together for the greater good of Casa Velha and the environment.