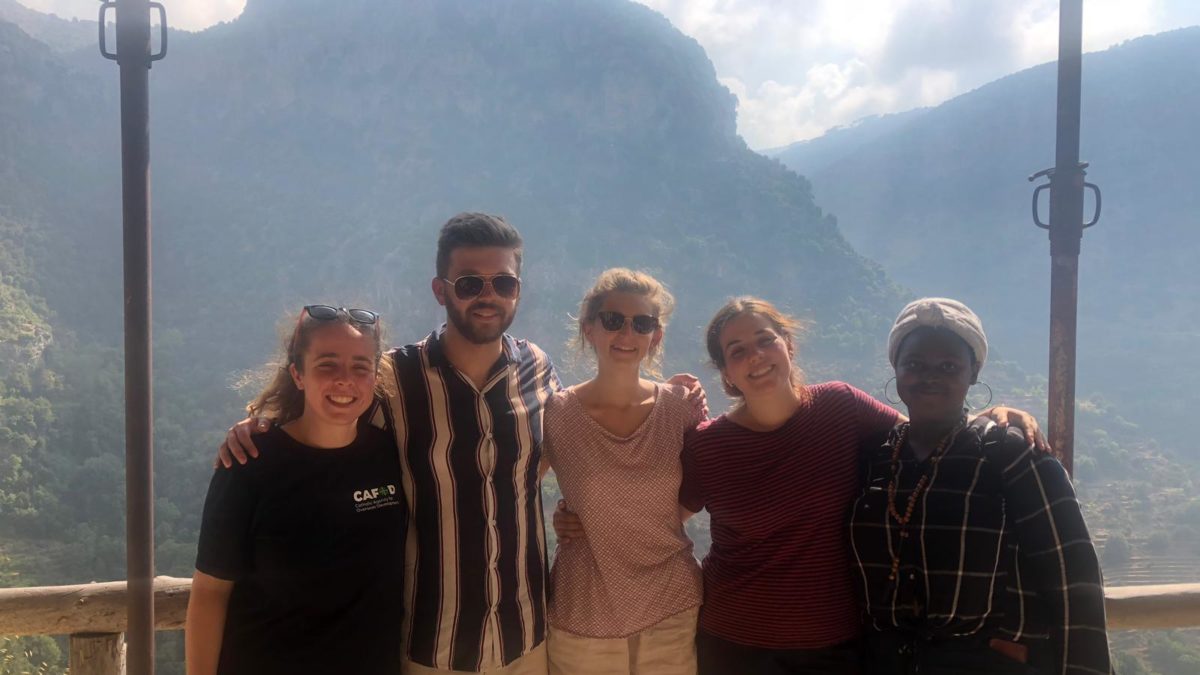 Joshua Nicol with other young leaders at a camp organised by Caritas Lebanon.

Visiting Lebanon as part of a CAFOD initiative, student Joshua Nichol, 21, explains how he experienced warmth, welcome, strength and the Kingdom of God.

The notion of a journey is one that is commonplace within our culture, both in secular and church communities. This ‘journey’ manifested itself in a way that was yet unknown to me while travelling to Lebanon with CAFOD in September 2019.

Despite the wide-scale conflict that has occurred in the country, when we were met by the local Caritas volunteers in Beirut, there was a noticeable feeling of belonging.

While travelling from Beirut to Amioun, the location of our base, the cultural differences were awe-inspiring. The flashes of the downtown suburbia in Beirut soon combined with the beautiful natural orange-yellow of the dust tracks and stone buildings. We arrived in the north-western region of Koura.

While Lebanon is the only region in the Middle East without a desert, this is expected to change in the future as a result of climate change. Changing temperatures and political uncertainty is a concoction that results in a social climate of apathy, unrest, and widespread poverty.

The aim of the camp, organised by Caritas Lebanon, was to enable groups of young campaigners and volunteers from Italy, Germany, Egypt, Syria and Lebanon to journey together in discovering how our charities could work on social enterprise projects.

In discussions about our countries, we found a commonplace longing.


Each person camping on the classroom floors of that Koura school longed for a society where the Gospel message of ‘Love thy neighbour’ rings true and Pope Francis’ urgency on tackling the climate emergency is taken seriously.

Hence, the choice of the tagline for the camp – ‘I speak humanity’.

A vision of hope

We journeyed to the mountainous northeast region of the country, which shares a border with Syria, where harsh winters lead to some families trapped inside their own homes, stockpiling food and foregoing any education or employment for that period. Yet, the family we visited retained hope through their children.

The father was unable to work as a result of a heart condition and forced to travel the length of the country for a hospital. The mother works in a factory in Deir El Ahmar to provide for her family. This gives their sons the opportunity to go to school.

The boys were buoyant. They kicked around a football, running and shouting and smiling in joy. There is hope for their future.

For this family, the harsh winters had not only brought isolation from the outside world but a tangible risk of injury. Their house was badly damaged by the damp caused by several feet of annual snowfall and we were told it was at risk of collapse.

We are calling for urgent climate action – sign the petition now

Our visit led to the intervention of Caritas Lebanon, who assured us the house would be renovated at the soonest possibility.

On 13 October, it was harrowing to witness large parts of forested area in Lebanon ravaged by wildfire. The effects of the widespread fires are still echoing across the country at the time of writing.

Journeying in the heart

Lebanon faces louder echoes of political unrest from this devastating natural emergency. Thousands upon thousands of people flooded to the streets to peacefully demonstrate against new taxes, corruption, and poor services.

The Lebanese vision of the future is one of transparency and open democracy.

I am reminded of the words of Rowan Williams: “The Church exists to connect people at the level of their hunger for a new world.” Our connections with the Lebanese people were much more than a face value discussion about their employment, their house or their children.

We have lots of prayer and reflection resources available to download

The flames of Lebanon serve as a reminder for us all to keep close to our hearts the things that we care about. The things that God has placed there can be used to change the hearts of other people.

A longer version of this blog was originally printed in The Universe.E