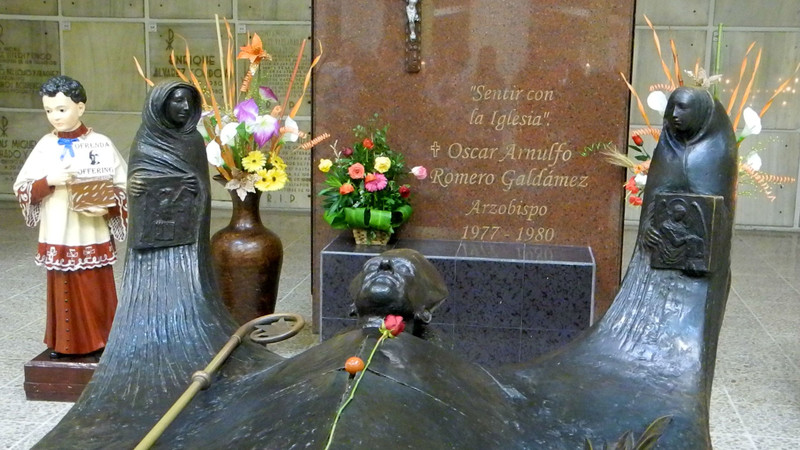 Saint Oscar Romero’s tomb in the crypt of the Metropolitan Cathedral of San Salvador.

On Saint Oscar Romero’s birthday, CAFOD’s Lucy Jardine looks back on her visit to his tomb in San Salvador.

In January 2018 I was working on CAFOD’s gap year programme for young adults, Step into the Gap. I was frantically busy with final preparations for our gappers’ visits to El Salvador, Nicaragua and Sierra Leone.

As I would be accompanying the gappers travelling to El Salvador and Nicaragua, I’d considered their health and readiness and had prayed, and asked for prayers, for a good trip for them and the people they were due to meet.

What I hadn’t really done is stopped for some personal reflection. I didn’t have any particular expectations for the trip for myself, other than perhaps the obvious desire to learn more about our partners and to return inspired and energised with stories to share with our amazing supporters in England and Wales.

Find prayers to celebrate the life of Saint Oscar Romero

We landed in San Salvador on a hot, steamy evening. Our plan for the next few days was to follow in the footsteps of Romero – a mini pilgrimage if you like, before our meetings with partners got underway.

I knew a bit about Romero – how could I not, working at CAFOD?! But I didn’t grow up with stories from ‘the CAFOD lady’ at school, and didn’t have any strong feelings about visiting the place he called home for a while, and the place he was eventually killed.

We spent the next couple of days in and around the city of San Salvador, visiting the University of Central America (UCA) where Salvadoran soldiers killed six Jesuit priests, and the caretaker’s wife and daughter, during the civil war for advocating for a peaceful, negotiated settlement.

In the chapel at the UCA, we read quotes of Romero, and an understanding started to dawn of just what he meant to the Salvadoran people. We spent time at the museum dedicated to their memory. I started to get a sense of just how brutal the civil war had been, and how its repercussions continue to be felt.

“I was not prepared for this incredible sense of pain”

Our final day in San Salvador started out in the main cathedral, where we went for Mass down in the crypt, which is where Romero’s tomb and final resting place is. I wasn’t sure what to expect. My focus had been so on the gappers that I hadn’t really paused to think how I might feel. I was not prepared for this incredible sense of pain – his pain, the suffering of the people of El Salvador – that completely overwhelmed me.

I stood and cried and prayed for a while, attempting to gather myself. After a little while we gathered round a lady who was keen to share her story with us. She described how she’d go to Mass with Romero, and how the whole country stopped to listen (including the military and the police) when his sermons were being broadcast. He truly was a prophetic voice, speaking out and speaking up against injustices the poorest people were suffering.

A bit later in the day, we visited the chapel where he was assassinated, saw his vestments and met a Sister from Guatemala who shared how he inspired her to religious life. We saw footage of his funeral and the shootings that took place then. And I got it. I got why people made crosses with his face on them (rather than Jesus’ face). I got why they revered him. He was a man of the cloth, but a man of the people.

I recently had the profound privilege of meeting Vargas, a human rights lawyer from Brazil. He shared the pain and helplessness he felt when he heard how Fernando, a survivor and key witness of a massacre in 2017, for which no-one has been brought to justice, was himself murdered the very morning after Vargas had been speaking to him. For defending those who peacefully stand up for their rights, Vargas himself has been victimised, criminalised and had death threats against him.

Two-and-a-half years have passed since my visit to El Salvador, but those 10 minutes spent by Romero’s tomb have never left me. They have stayed with me and inspire me every day. They inspire me to keep sharing the stories of amazing people like Vargas, to keep raising awareness of the deep injustices that people across the world face and, in my own small way, contribute to a better world.