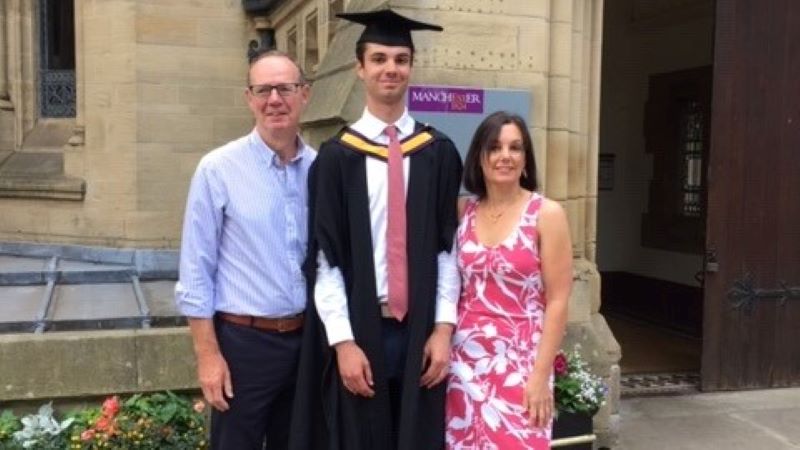 Joe's graduation day with mum and dad (Safina and Nigel)

I still light a candle every evening. Even after two years, I still feel pain and confusion, heartbreak and anger.

I know that I’m allowed to feel these things – they are normal parts of the grieving process – but I refuse to let them overwhelm me. This is why I light a candle every evening: the tiny flame reminds me that there is always hope, even when I feel lost in the dark.

Joe was kind, gentle and overwhelmingly considerate of others. In one school report a teacher wrote: “Joe has such a wonderful soft nature. I do not see one ounce of bad in him.”

Joe had an incredibly loyal group of friends. They wrote beautiful things about him:

“Joe was unanimously loved by everyone who had the pleasure of knowing him. The impact he has had on every single one of our lives has shaped us into the people we are today.”

“Each of us at some point has turned to Joe for guidance and support and left with a smile on our faces because he knew how to make the best of any situation.”

“Joe pulled us all together and essentially created one big family.”

Joe was the cornerstone of our family

He was always pulling people together. On one occasion, during a family holiday, everyone (except Joe) was arguing and bickering over something trivial. Eventually, in typical ironic fashion, Joe blurted out: “This holiday is tearing our family apart!”

We all laughed and immediately stopped arguing. Equipped with his dry, sharp wit, Joe was often the family mediator and voice of reason.

I wish I could still hear his voice. And his laugh. And see his smile.

My son Joe died in sudden, unexpected and unexplained circumstances following a night out celebrating his 23rd birthday with his friends and older brother, James.

I can picture him the day before he died: he was sitting on the sofa, with his feet up, watching the football results and telling his dad that his beloved Charlton were losing… again. That image has stayed with me and I think it always will. The next day he was gone. This is still such a difficult concept for me to comprehend. One day my son was alive, the next day he wasn’t.

Remember Joe with a donation

Life can change in the blink of an eye

I felt raw disbelief in the aftermath of my son’s death. People kept telling me that I was being “brave” or that I was “doing so well”, but inside I didn’t feel brave at all. I felt bewildered and lost. I felt afraid. Some days I just wanted to scream.

On other days, I felt this great sense of the strangeness of time. Sitting alone in my bedroom, I could be sure that Joe was still alive, that none of this had ever really happened and Joe was in his bedroom listening to David Bowie, but as soon as I stepped out into the hallway, in the silence of our home, a wave of grief would come crashing down on me – time catching up with itself. It’s disconcerting and physically painful to be struck by reality like that.

Often, time moved with excruciating slowness. The dark hours of night, in particular, seemed to stretch on forever. One friend accurately described grief as “like walking through treacle”.

Why I started writing poems

Another friend lent me a book of poems by Michael Rosen, whose son also died at a young age. These poems resonated with me. I was inspired by them, as well as by the beautiful words from Joe’s friends, to write my own poetry – something I had never done before – about Joe, about what it feels like to grieve for a loved one.

Through poetry, I soon realised that despite the pain I was in, it was still possible to find small moments of joy: happy memories of Joe; good times with friends and family; the thought of Joe meeting my Nana and my cousin Paul, wherever they all are now. These moments were bittersweet but comforting.

Writing poems, I began to look at my new strange world in a different way. Occasionally, I felt a kind of energy – a warmth – as though Joe was still there with me. Now, every time the sun shines in my eyes or the wind blows in my hair, I feel his presence. It’s like the light of that small candle flame in the dark, giving me hope where I once felt there could be none.

Find out more about Candlelight Funds

Joe cared about the climate crisis

I think of Joe when I spend time in nature, feeling the heat of the sun and the touch of the wind, because Joe cared deeply about the environment. He became a vegetarian largely because of concerns about global warming. He studied Environmental Management at Manchester University and was due to begin a Masters in Environmental Technology at Imperial. He was slowly but surely, and in the kindest way possible, educating our family about the dangers of global warming and the small steps we can all take to help deal with the problem.

It was for this reason that my Mum (Joe’s Nanny) decided to set up a Candlelight Fund in Joe’s name – to honour him by raising money to help stop the climate crisis. I know that it’s something he would have been proud of.

To help raise more money, I’ve also compiled some of the poems and letters I wrote during the first year of life without Joe. It’s quite a scary thing to share poetry, especially poems that are so personal, but it’s my hope that it may be of help to other people out there who miss their loved ones deeply and struggle to express their grief.

Hopefully, you can find something in this collection to connect with. Perhaps it will provide some small flicker of hope, like a candle in the darkness.

Give a gift in memory of Joe

If you would like to buy Walking Through Treacle, Safina’s book of poems and letters, get in touch by calling 020 7095 5348 or emailing Roisin at candlelight@cafod.org.uk and make a donation to Joe’s Candlelight Fund.

One thought on “Candlelight Funds: Walking through treacle”