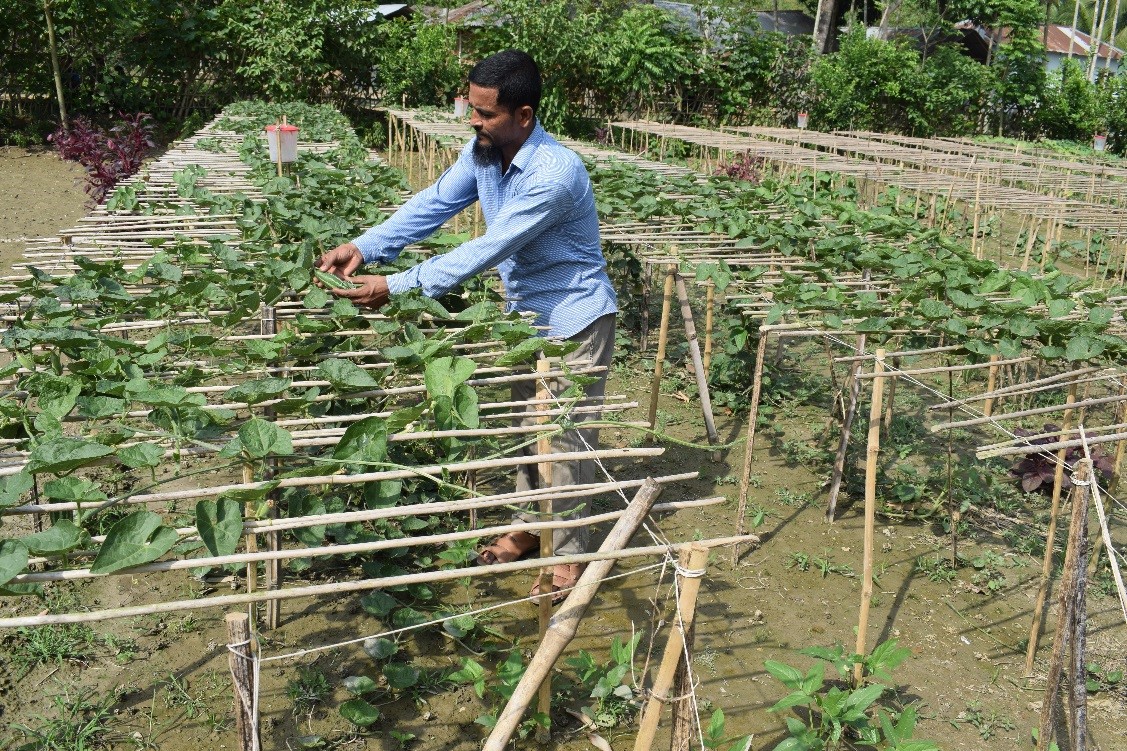 Becca Haile is our Bangladesh Programme Officer. She tells us about the negative impact of chemicals in farming and the importance of moving towards more sustainable solutions.

Soil is, quite simply, the life blood of our Earth. It sustains our food production and provides a habitat for millions of living organisms. It can even help regulate our climate. But I’d never truly understood just how important soil is to the well-being of our planet before I visited Bangladesh and spoke to farmers whose lives had been directly impacted by changes to their soil.

In 2017 I met 38-year-old Jamal Hossain. He is a small-scale farmer, father and husband from Jessore in South West Bangladesh. Jamal described to me how just four years earlier he had to stop farming completely. Years of applying excessive amounts of chemical fertilisers and pesticides to his soil had left him in poor health and unable to continue working on his land. Jamal had also noticed that the quality of his soil had worsened over the years and his produce had suffered.

To make ends meet he took up work as a day labourer. He transported stone and concrete to construction sites. “It was hard work and physically draining. I so wanted to start working on my land again but I was too worried about my health,” Jamal told me.

The consequences of chemical fertilisers

Since the late 1970s, chemical fertilisers and pesticides have been increasingly pushed on to farmers like Jamal across Bangladesh as art of the ‘Green Revolution’ approach. This initiative promoted commercial-scale food production and an end to subsistence farming across many developing countries. It resulted, however,  in harmful implications for human health, soil and water quality.

Subsidies for chemical fertilisers and the pressure placed on farmers to produce food to meet Bangladesh’s rapid population growth has led to farmers becoming over-dependent on chemicals. Excessive use of chemical fertilisers and pesticides and failure to replenish soil with organic compost – a cheaper and sustainable alternative to chemicals – has left soils in many parts of Bangladesh unproductive. This has threatened farmers’ livelihoods and their ability to feed their families.

Bangladesh’s extreme vulnerability to climate change and natural disasters adds to this problem. Unpredictable rains and extreme weather conditions including floods, cyclones and storm surges are making it increasingly difficult for farmers to effectively plan their production. Declining soil health has exacerbated the issue further.

Donations to CAFOD’s Lent Appeal in 2015 were doubled by the UK Government. This allowed CAFOD’s partners in Bangladesh to work with farmers, like Jamal, supporting them to adapt their farming techniques towards more sustainable, organic and climate-resilient solutions. A key component of this work has included introducing farmers to vermi-compost. Vermi-compost is a nutrient rich, organic and sustainable fertiliser produced from the excreta of earthworms. It can be easily and cheaply prepared, using cow dung, banana leaf and food waste.

Jamal attended several training sessions on how to produce and use vermi-compost. He was inspired to begin using it on his own land.

“In the past I used only chemical fertilisers and pesticides on my soil,” Jamal explained, “because I thought that was the only way to farm. I was interested to find out whether this new way of farming would allow me to grow crops on my land again.”

Donations to our Lent appeal will once again be doubled by the UK Government. Donate before 12 May to have your donation matched

Jamal’s health has improved and so have his crops

18 months on and Jamal has seen huge improvements in the quality of his soil and his produce. “I’ve had a coconut tree on my land which failed to produce any fruit for 20 years. After introducing vermi-compost to my soil, the tree is now starting to bear fruit – it’s really amazing!”

He has also noticed fewer harmful pests and less occurrences of disease affecting his crops. Instead, “Now I see butterflies, bees, birds and dragonflies around my crops. These are all contributing to improving my yields.”

Jamal’s health has really improved and he is back to farming full time. He now produces enough food to feed his family and can sell the surplus for income.

Jamal has become a passionate advocate for more organic farming solutions. He encourages other farmers in his community to move away from excessive use of chemicals on soil. He has also called on the local government to provide greater awareness raising to farmers around the benefits of organic farming.

“I really believe in this farming method and I now have evidence to show my neighbours that it works! Vermi-compost is not just good for my crops and my income but it’s good for the environment and our health. We need to encourage the next generation to move away from chemical to organic farming – it is better in so many ways.”

Meeting Jamal has inspired me to think much more deeply about the ways we can all contribute towards living more sustainably.  Never again will I underestimate the power of an earthworm and just how much soil really does matter.