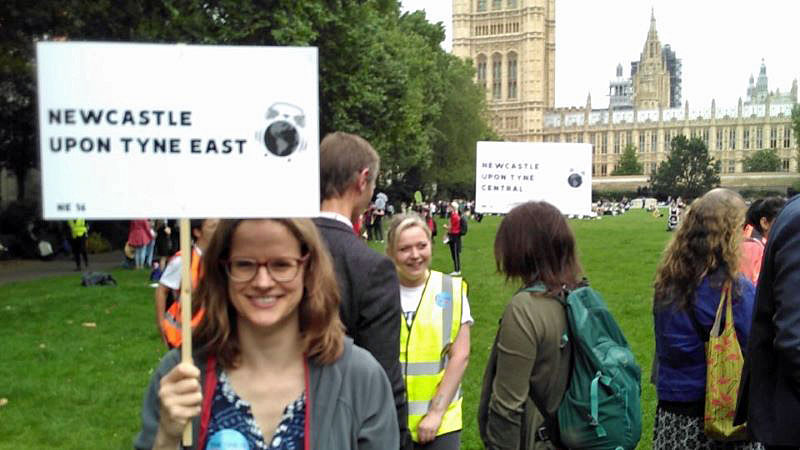 Elizabeth Bennett, a Climate Champion for CAFOD, waits to speak to her MP at the mass lobby.

Elizabeth Bennett is a CAFOD Climate Champion from the Hexham and Newcastle diocese. On 26 June she joined thousands of campaigners at the Time is Now mass lobby in London, all calling for further, faster action from MPs on the climate crisis.

For me, the mass lobby day started with an interfaith workshop on the issue of climate change. While I listened, a photo pinged through on my phone from my husband of our little girl, grinning like a wild thing and running through a country park. Truth is, I’d rather have been in the country park too, but every time I try to imagine my daughter’s future my thoughts are tinged with dread.

Why I became a Climate Champion

We’ve known about climate change my whole life, but realising how much the poorest and most vulnerable communities are paying the price for western developments is a more recent realisation. Climate change is a social justice issue and we know that individuals making personal changes is not enough to counter it. We need politically driven changes to avert a humanitarian disaster.

That’s why this year I’ve signed up as a Climate Champion with CAFOD to try and contribute to that essential social and political shift.

Admiring banners in the lobby line

My godfather joined me on the South Bank and then we walked the full length of the lobby line. I loved the range of groups represented: National Trust rangers in uniform, Women’s Institute sashes in abundance, the Extinction Rebellion logo, alongside those of Action Aid, WWF, CAFOD and many others. The banners were brilliant too – as a geeky NHS scientist I particularly liked the time management and risk assessment grids. They prove why climate justice is the issue we should be tackling right now. There were hand-sewn banners that were works of art in their own right, a 3D bat and someone in a beaver costume who needed guiding around.

At 2pm everyone’s alarms went off and I wished I had thought to bring a whistle as those around us whooped and cheered.

Waiting for my MP

My MP, Nick Brown, was willing to meet, but inside Parliament and not on the lobby lines. I tried to encourage him outside, but he’d already offered to guide a school tour, and it seemed a reasonable compromise.

Before the lobby, we collected over 130 individual letters asking for action from those unable to join us in London. We didn’t offer a template, so the letters were varied and heartfelt: from the activists who regularly question Mr Brown on the topic, to two sides of A4 from a grandmother speaking in detail about her fears for her children and grandchildren. Young people had drawn pictures and spelled phonetically.

The message was clear: the Earth is our responsibility and we are failing to care for it.

It took 90 minutes to get through security. As someone patted me down she asked a colleague about my ‘The Time Is Now’ sticker. He told her he’d given up on removing the stickers – they were already everywhere. That made me smile.

My MP said he was proud to have sponsored Parliament’s declaration of a climate emergency on 1 May, so my concerns and those of my fellow constituents were around why so little action had actually been taken.

I met Mr Brown alongside 20 students from St Mary’s Catholic high school, their teachers and four others. He pushed back his next meeting to give us a full hour, in spite of the delays at security. He was well-informed and had clearly taken the time to be briefed on the issues we’d raised.

Having set off at 5am on their coach, the students began by asking him a range of questions on environmental concerns. They were an impressive bunch, asking questions on socio-economic issues faced by people in the UK around climate change.

Disappointingly, when the students raised questions on protecting the poorest in the UK the answers became party political. The Committee on Climate Change has made it very clear that a net-zero Britain is entirely achievable, but policy will need to be clear and devoid of political issues.

Unfortunately there wasn’t time to ask Mr Brown how we would achieve change with so much political uncertainty, but I will put it in an email later.