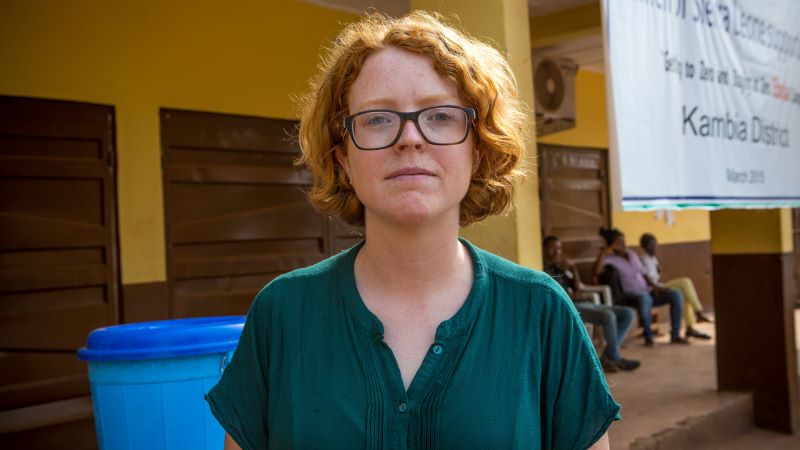 Laura Purves, one of CAFOD’s Emergency Response Officers, reflects on her experiences in Sierra Leone during the Ebola epidemic in 2015 – in particular, what was learned that can be used to help in the Democratic Republic of Congo now.

“I imagine that it is me lying there,” says Alex. “Would I want the burial team to delay or treat me bad? No!”

It’s been five years, but I’ll never forget these poignant words from Alex Musa Koroma, a science teacher of 29 years. Nor will I forget his smiling eyes, thoughtful replies and utter commitment to being a part of the fight against Ebola in Sierra Leone in 2014-2015.

“Today it is the person lying in front of me. Tomorrow it could be me,” Alex went on to add. “Being respectful and dignified means everything to the family and the community we are in.”

The DRC has been dealing with an Ebola outbreak since last August. The latest World Health Organisation (WHO) figures show that there have been more than 2,600 infected cases and 1,790 deaths.

Local volunteers on the frontline of the Ebola crisis

Alex was a safe and dignified burial volunteer in the north of Sierra Leone, supported by our local Catholic aid agency Caritas Makeni . This was in Kambia, one of the epicentres of the outbreak.

During those challenging months, the burial teams attended seven or eight burials in a day on average. The highest was 17.

“I volunteered because Ebola is not just for medical staff. As a teacher I have to play my part,” he told me. Many communities were sceptical of the trained burial teams. The Sierra Leoneans could not reconcile the practice of a safe medical burial with their traditions and customs.

Faith leaders at the heart of creating awareness about Ebola

During the Sierra Leone outbreak there was fear and uncertainty, which led to protests against burial teams. Some were attacked or barred from collecting bodies. To reduce this fear and opposition, we worked together with faith and traditional leaders. We educated their communities on the risks of the virus and how to prevent it.

Our burial teams made sure that a religious leader attended the graveside. They would offer prayers or conduct burials that didn’t involve body contact. We worked hard to include and promote female members on burial teams too. They were able to decontaminate female corpses and ensure their modesty before being taken to the graveside by teams of both men and women.

Sierra Leone, like the Democratic Republic of the Congo (DRC), is a country characterised by a deep sense of faith. Religious leaders are a source of support at a time of fear, confusion, loss, suffering, financial hardship and trauma.

Once the Ebola crisis in West Africa was over, the World Health Organisation (WHO) acknowledged that mobilising community and religious leaders was a key priority for tackling future outbreaks.

Pray for those affected by Ebola

We know that faith leaders were active at the heart of their communities, in Sierra Leone. Many pastors, priests and imams worked hard to persuade people to change the unsafe burial practices and deep-rooted cultural traditions that help Ebola to spread. Their participation in tackling this appalling disease was pivotal.

Your prayers and support make a difference

I spent four months working on the Ebola response in Sierra Leone and got to know the safe and dignified burial volunteers and their families. When I left, the country was heading towards zero new cases. Thanks to the hard work of Faith leaders, dedicated volunteers such as Alex and support from CAFOD supporters across England and Wales, Sierra Leone was declared Ebola free in November 2015. It was a joyful day for me and the amazing volunteers.

I am concerned that the Ebola virus is once again threatening the lives of thousands of people in Africa, in the second largest outbreak in history, in DRC.  However, I am comforted to see that organisations such as CAFOD are using their experiences from Sierra Leone and mobilising Faith leaders and structures to create awareness of ways of reducing the risk of the spread of the disease and promote a community led response.

When Alex heard about the generosity of CAFOD supporters across England and Wales, to the West Africa Ebola Appeal, he told me:

“It reminds me how close God is to us when we hear about the prayers and solidarity of people so far away. It is also a reminder that we should all do whatever we can, no matter how small, in the service of others in great need.”

There is hard work ahead, and the people of DRC will need our support. But I retain hope that the DRC will soon join the ranks of Guinea, Liberia and Sierra Leone and will not need to look to the 2014-15 outbreak for anything more than how to celebrate being Ebola free.