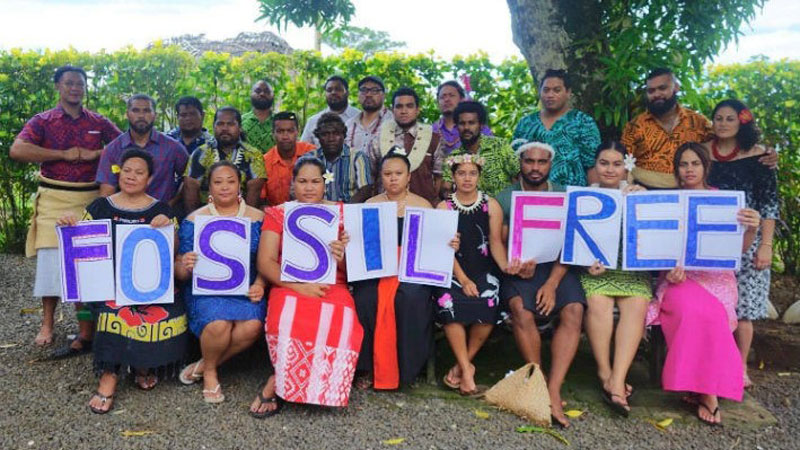 Joseph Moeono-Kolio - in the centre with glasses - and the Pacific Climate Warriors are sending their message for the Fossil Free Campaign.

Communities in the Pacific Islands are on the frontline of climate change. Many are being forced to adapt to ever-changing and dangerous weather conditions or flee their lands.

Despite this, the Pacific Islands are leading the call for global climate action.

Joseph Moeono-Kolio is a ‘Pacific Climate Warrior’ and also a consultant for Caritas Oceania. He offers his reflections on the current climate crisis to Daniel Hale, CAFOD’s Head of Campaigns.


Daniel Hale: Talofa Joseph – could you tell me a little about Oceania?

Joseph Moeono-Kolio: Talofa Dan. Well, where to start…the Pacific has been described in many ways by many people. For me, Oceania is a vast ‘ocean continent’,  with many different cultures and peoples spread over an area of more than three million square miles. We are connected by our ocean and shared history of resilience.

We have thousands of small islands, each with their own unique cultures. There’s Hawaii in the north, Rapanui to the west and Aotearoa in the deep south. In Oceania there is Polynesia, Micronesia and Melanesia and the many island communities within, and then Australia to the west.

Together, there are about 40 million people. We are very much connected to one another, to our ocean and to our many rich cultures and languages.

In what way is climate change hitting communities in the Pacific?

Joseph: To be frank, we are affected in every way.

Rising sea levels erode our coastlines and homes. Extreme weather keeps destroying our infrastructure. Rising acid levels in the ocean are ruining our coral and fish stocks – I could go on and on.

Our most vulnerable communities feel these impacts the most.

Extreme weather is more frequent now, and even more extreme. Cyclone Winston that hit Fiji a few years back was the strongest to ever make landfall in the Pacific – 44 people lost their lives.

Fiji was hit twice in 2018 by Cyclones Josie and Keni.

Last year, Cyclone Gita left a trail of destruction as she went for a tour around the Pacific. At Category 1, it left Samoa’s capital Apia in a serious flooding situation and, by the time it had reached Tonga, it was already a Category 4 and completely flattened many parts of the country.

Can you give me an example of how people are being affected by climate change?

Joseph: If you want to really understand what is going on, talk to people from the different parts of the Pacific who are affected in different ways.

Communities in the Petats, Taiof and Teop Islands off the coast of Bougainville island in Papua New Guinea have told us how they’ve experienced increasingly destructive king and high tides since the year 2000.

That area is home to almost 9,000 people. Since 2015, however, there’s been an ongoing migration of nearby Carteret islanders to mainland Bougainville due to rising sea levels making their islands increasingly difficult to live on.

Read our FAQs on climate change

For me, climate change is intensely personal as well.

At UN summits, I have been able to share the story of my father’s village, Falefa. Falefa is a very ancient place in the lore of Samoa’s history, located on the north-eastern coast of the main island of Upolu. I grew up listening to Dad’s stories about it.

When I was 16, my father took me out for a walk through our village, reciting the stories of our family and our people, stories of his childhood and of the memories each place held.

We walked towards the coast to show me where he went to school. Before we had even arrived, we were already in the sea. There, where his school once stood, was the open ocean.

As my father was telling me this story, I imagined the place where we now stood as it once was – where he and his childhood friends used to play, where they once came to learn about the world around them. We stood there for a while, both our feet underwater, thinking of his school which now rested beneath the waves in front of us.

This is a story played out in many parts of the Pacific and forms part of a part of a wider narrative – of communities on the frontline affected by climate change but who are also at the frontline of climate action. It is important that we do not decouple these two important points from the Pacific climate narrative.

You do quite a lot of work with young people. Can you tell me about it?

Joseph: Over the last couple of years we’ve been very intentional with ensuring that young people are not only informed about what’s going on but that we’re creating accessible spaces for them to engage with the issue.

We have an amazing community of ‘Pacific Climate Warriors’ drawn from all over the Pacific. We work within our communities to enable climate action at home and to bring together the stories and voices of our people to influence climate policy at national and international levels.

We have a culture of storytelling in the Pacific and we’re using that to advocate for our people whose stories, knowledge and experiences are sometimes misrepresented by well-meaning but misguided people not from the region.

Stand united with CAFOD against the climate crisis

What changes do you think would be helpful from the global community?

Joseph: We have a saying back home in Samoa: “O le ua na fua mai Manuʻa” (or “the coming rains of Manu’a”). It is a saying sometimes used to reinforce the need to be prepared and to do what is necessary. We have known about climate change for some time and now we all know that the urgency of the situation means we need to be prepared to act now.

What we need from the international community is this – greater ambition and commitment to reducing their emissions and moving towards a more sustainable way of living.

Developed nations need to take moral responsibility for the harm that has been caused. They need to join with vulnerable nations in meaningful solidarity that seeks our collective good and the protection of our common home.

Ask the Government to show leadership at COP26

We need to recognise that:

Do you have any final thoughts for us, Joseph?

Joseph: I think I’ve said a lot but I will close my comments with a reflection from two Samoan proverbs:

The Fijian government held the presidency for COP (Conference of Parties) 23 in Germany in 2017. They emphasised the fact that we are in the same canoe and I am of that same mindset. We continue that message today.

The starting point of this voyage must be by having the voices of vulnerable communities heard, their traditional knowledge and wisdom brought to the climate action table and their adaptation and mitigation needs to be the focal point of these discussions.

The canoe cannot go anywhere without everyone in it of the same mind and understanding of where to go. This is what we mean by being in the same canoe.

But just as our canoes cannot go far without the wind, our work cannot be achieved if we don’t heed the urgency of where we are now: ‘steer like a canoe moving into the wind’ and move together with haste to where we want to go.

Daniel: Thank you for telling us about your work Joseph – good luck!

Joseph: Thanks Daniel. Please keep praying for us – we wish CAFOD the best also. Faafetai lava.