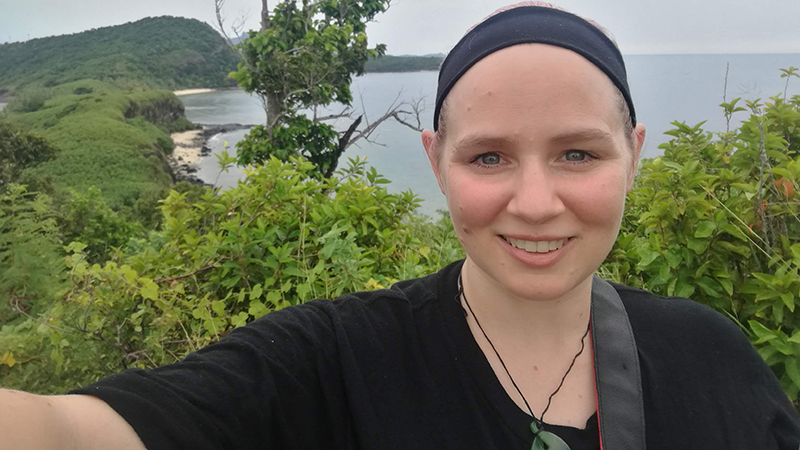 Libby is a Campaigns Officer at CAFOD. In 2019 she journeyed to the South Pacific to hear how Indigenous people are feeling the worst effects of the climate crisis – despite contributing so little to it.

Read about Mary, a Climate Warrior leading the way in New Zealand

For reasons out of my control, I was forced to spend a few lazy days on an idyllic tropical Fijian beach – tough life, I know. But after a few days of lounging, the organiser in me got restless. I thought it best that I add some activities to my day or else I would fall out of routine and caught up in ‘Fiji Time’ – an understanding of time as relaxed as the islands themselves.

I booked myself on a sunrise hike up to Nakeke Point on nearby Naviti Island, part of an archipelago known as the Yasawas. After a steep uphill but enjoyable hike to the top, we sat looking out at the world, catching our breath, and snacking on some of the freshest fruit I’ve ever eaten. We sat in silence taking it in, but then the winds picked up. Ultimately, weather makes good for universal small talk, so we discussed how the rainy season had been. Sela, my guide, said that it had been a quiet cyclone season, nothing compared to when Cyclone Winston hit in 2016.

Cyclone Winston had been mentioned daily to me, by taxi drivers, by hostel staff – a Category 5 storm, it was the largest ever to hit Fiji. Fijians wanted to talk about the mark it had left.

Sela told us how it came from nowhere: “I came back to the village the next day, and it was gone. The village, all gone. One day your house is there, you leave, and you come back the next morning – nothing.”

Ask the government to lead the way on climate action

Although Sela’s community had no casualties, other islands weren’t so lucky. On a trip to his village, Soso, two days later, I could see that villagers were still rebuilding. And Sela worried more storms like Winston would come.

But it’s not just storms.

While we waited for our belated pickup back to our island (Fiji Time was a great excuse for things to take their time), Sela mentioned the coconut trees: “There used to be many trees on the waterline. Not anymore. The waters just keep coming up and coming up.” It was obvious to those who knew the land and sea that it was changing.

Later, Atu, the diving instructor, had a lot to say about the changing ocean and how it affects his livelihood:

“It feels like everything is in reverse. When the tide should be high it’s actually lower. When we think it will be low, it’s still high. My job is to give everyone their best experience diving, but I can’t do that if the ocean life is in chaos.”

The islands need tourism to thrive, but Atu is worried about environmental damage. He wants to explain to tourists that it is vital we face the issue of climate change together – because it really is climate chaos for Fijians and other islanders.

I learned all this just from my moment of rest! By the time I was ready to attend conferences and workshops on climate change the following week, I was fired up to learn from Pacific island activists, who tell us they are not drowning, they are fighting.

What I discovered was that those tackling climate change are not only campaigning to raise awareness of the issue; they must also focus on how to adapt from the chaos it is creating.

Because to them, it’s already reality.

Fields of sugarcane crops are already salinated from rising sea levels and entire villages have relocated. The young adults I met, whose lives will certainly be the most affected, spent a lot of time thinking about terms like ‘climate refugee’ and ‘climate migrant’. For them, they are already preparing for the worst, because they don’t see global leaders acting urgently enough.

It isn’t all bad news, and many of them remain hopeful. I asked Atu for one thing we could do. He said, “Change something in your life for the better. Use less plastic – so much plastic in the ocean! Fly less to visit us.”

“About that flying,” I said sheepishly, considering how many trees I’d need to plant after my trip was over.

“Don’t worry,” he smiled from ear to ear. “I’m glad you flew here. It’s nice to make new friends from all over the world.”

Now back in Blighty, daydreaming under partly cloudy skies, I am more determined than ever to share stories from the Pacific. Fijians are responsible for less than 1% of the world’s carbon emissions, yet they are the ones already facing the effects of climate change.

We are in an amazing position of power to influence our government to make change happen.