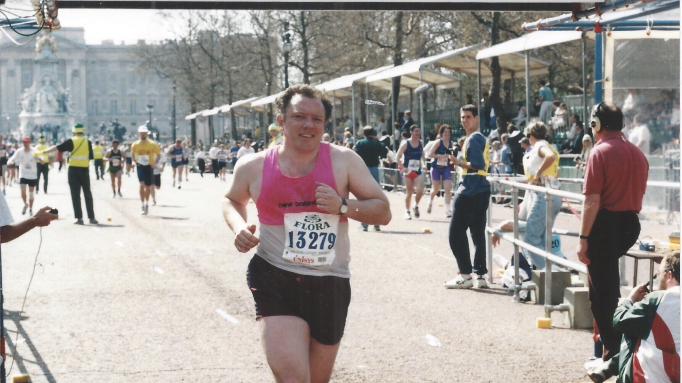 John finishing the London Marathon in 1996

Dr John Joyce, who is running the London Landmarks Half Marathon for CAFOD in August 2021, tells us about his work in Afghanistan and Nepal and why he is supporting CAFOD.

My name is Dr John Joyce, and I am running for CAFOD as it is a practical way of supporting people overseas to improve their lives, especially in this time of great need. I have always supported CAFOD , and I will continue to do so. It helps in the training for the run, knowing that my efforts will help others, particularly on cold and windy nights when running seems less than inviting! Hopefully all the effort will come to fruition on Sunday 1st August 2021.

I have set up a Candlelight Fund with CAFOD in memory of my parents Anne and Christopher Joyce. They were Irish Catholic immigrants to the UK and they raised my brother; sister and I in the Catholic Faith for which I am very grateful.

Donate to John’s Half Marathon adventure on his Candlelight Fund

Dr John’s experience working as a doctor overseas, continues to inspire him to support our local experts

After I qualified as a doctor, I wanted to practice medicine in less affluent countries. So, after completing the Diploma in Tropical Medicine and Hygiene at Liverpool School of Tropical Medicine, I volunteered for two consecutive posts in Afghanistan and Nepal.

In Afghanistan I worked as a doctor on a landmine clearing team run by the British charity HALO Trust (Hazardous Area Life-support Organisation). I was at the minefield to deal with any injuries to the deminers or expatriate staff.

While I was there, I saw the generosity of the Afghan people to charity workers amidst the poverty of many. With medical care basic or non-existent, I ran clinics by the edge of the mining sites for the locals, while we worked in the area to provide what care was possible with our limited supplies.

Malnutrition was common as was hypothyroidism from lack of iodine in the diet in this landlocked country. Since then (1994), better agriculture and clean water provision have improved life for many.

Just before I left a ceasefire between opposing factions of the Mujahideen ended and war broke out. On my journey out I encountered a convoy of about fifteen severely injured casualties from Kabul who were being evacuated by road to the hospital in Jalalabad where there was no fighting. As they had no medical care, I organised a basic triage, putting up drips and giving analgesia to the worse injured.

As we continued through the night, we were stopped by a convoy of Mujahideen, who had learned that there was a doctor present and wanted one of their own treated. I assessed him, gave some analgesia from their supply, and we could proceed. A few days later I flew out on a small UN chartered biplane from an airfield pocked with craters caused by mortars, which had to be filled in before we could leave safely.

Soon afterwards, I left for Nepal, where I worked with Trek-Aid, helping Tibetan refugees housed in four long established refugee camps in or near the provincial city of Pokhara, to the west of Kathmandu.

There was a great sense of community, such that when I saw an old man dying following a stroke and suggested that he could be sent to hospital, his relatives asked if they could care for him instead as not much could be done for him. I agreed and he died peacefully at home.

I was looked after by Karma, the chief nurse at the camp, who often invited me for dinner with her family. I met the refugees and the local Nepali population, both groups of which co-existed side by side amicably.

The two jobs forced me to solve problems with the resources available and I had to improvise care with what was available. On one occasion, after seeing a teenager caught in crossfire in Afghanistan with several bullet holes in one leg, we attempted, in the absence of X-rays, to try to find out if there were metal fragments left in his leg using a minesweeping device. Unfortunately, this was not too successful but the best available.

Overall, I enjoyed my time but returned to the UK to work at various posts including working with torture victims for several years. I hope on retirement to work abroad again, possibly in Malawi.

All this experience has shown me the importance of the work that CAFOD does, and my Candlelight Fund and running are a way to support this kind of work from the UK.

Could you take on a Running Challenge for CAFOD?