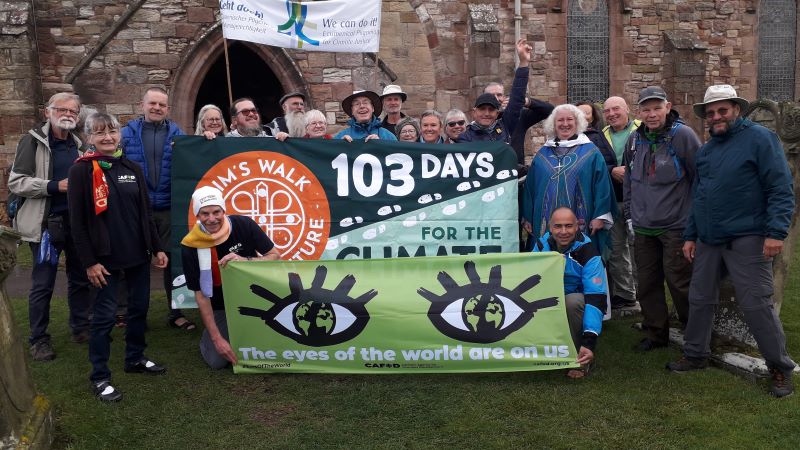 The amazing group of European climate pilgrims on Holy Island.

A group of European climate pilgrims have walked from Sweden, Poland, Italy, the Netherlands and Germany to Glasgow, where the UN climate summit – COP26 – is being held. Carol Cross, from CAFOD’s Middlesbrough Diocesan Office, met the pilgrims when they visited Holy Island.

Pray with us during COP26

On Saturday, unaware of the privileged encounters awaiting me, I met with the ecumenical group of European pilgrims who had made the journey on foot to the Holy Island of Lindisfarne in Northumberland.

The pilgrims had walked from Sweden, the Netherlands, Poland, Italy and Germany, covering over 1800km before arriving on the ferry at North Shields.

Inside the very basic camp where they were staying for two nights there were around 10 pilgrims who had arrived before the others. Two of them were nursing injuries – swollen legs and feet – that had forced them to stop walking for the day, so the support minibus had dropped them off.

Shortly afterwards the other pilgrims arrived. Ranging in age from early 30s to over 70, they had walked the last five miles along the Causeway in the gathering darkness. They were tired and foot sore, hungry and thirsty after covering over 22 miles, and welcomed the hot drink and biscuits on offer.

Gustav from Sweden, told me he had started walking in July – he said it had been the best day of the pilgrimage so far. I asked had he been able to keep in touch with his family. Now he had internet connection, he could at least send a message to let them know he was okay. I was amazed by the commitment he had made.

After dinner, I shared briefly our campaign activities – Parliament in your Parish in our churches and Eyes of the World in our schools. I shared the disappointment following the G7 summit and how important it was to speak with our local MPs to try and increase the pressure on our political leaders and urge them to act. I told them they were carrying the concerns and hopes of all those people who were suffering the effects of climate change but were unable to be present in Glasgow.

They listened politely and patiently when what they really wanted to do was to go to sleep, so I wished them good night.

Next morning we walked to St Mary the Virgin Church, which is near to the priory ruins, founded by Ss. Aidan and St Cuthbert. The pilgrims agreed to pose for photographs with CAFOD’s Eyes of the World banner. The vicar of Lindisfarne, Rev Canon Sarah Hills, came outside, welcomed the pilgrims and invited them to join the parish Harvest Festival thanksgiving celebrations.

Different people were given symbols of the harvest to bring forward and local fishermen had donated a lobster and crab they had caught in the sea off the island. Gifts that God had created and his sun and rain had nurtured.

Use this prayer during COP26

During the Mass, four of the pilgrims told the congregation why they were walking to Glasgow. They were concerned about the destruction of the earth and the loss of biodiversity, and the impact that climate change was having on the lives of people in countries suffering its effects. They were walking for future generations and to highlight the environmental degradation we are witnessing now and the urgency to stop global warming.

Hans, a Quaker from Sweden, who had a beard that would rival Gandalf’s, said it was wonderful that people of different faiths could unite in shared concern for the future of the earth and its people.

Annika, a young lady who works for the Church of Sweden, shared the four commitments they had made – eating meat and fish only once a week; agreeing not to fly for the rest of the year; not buying any new items; and not using the car on journeys of less than 4km. She said she’d written to the 14 Swedish bishops, asking them to take up the challenge too and awaits their response!

I asked Annika what her hopes were for the outcomes of the COP. She said, “That their (world leaders) hearts will be touched not to care only for their country’s needs but that they give what is needed for everyone, who is affected by climate change.”

Find ways to take action on the climate crisis

The eyes of the world are on us

Later in the day I caught up with Chris Böer, who had organised the pilgrimage from Munster in Germany. He told me he had worked previously for Bread for the World, an international NGO similar to CAFOD, and had been struck by how the communities they worked with were being affected and felt he needed to do something – hence the idea of organising a pilgrimage.

He said, “The most important message is, after we had agreed the measures to take in Paris to reduce CO₂ emissions drastically, we now need to follow up and make sure that countries do take up the measures and they are enough to reach the goal of 1.5 degrees and increase the speed because we now know that all the climate effects are coming quicker than we anticipated.”

Join us for the COP26 Day of Action

I hope their efforts are recognised by world leaders and have the desired effects and look forward to meeting them again in Glasgow!

You can find out more about the European pilgrims and follow their live location on their website: klimapilgern.de/en/