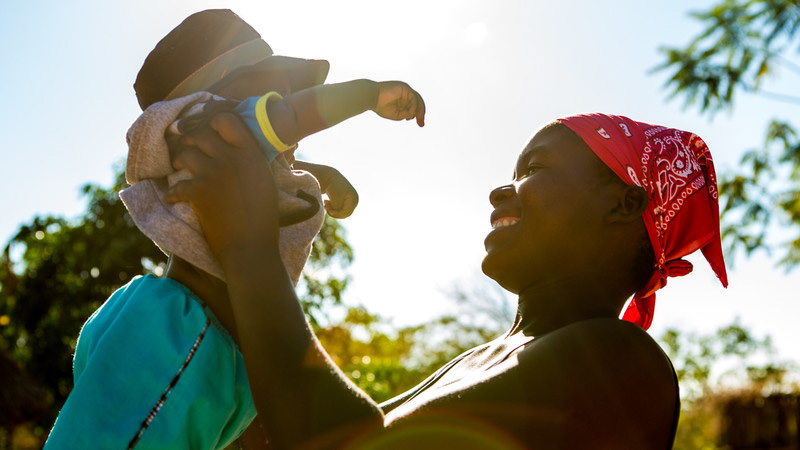 When Laura Storr from CAFOD’s communications team heard how new mum Unity from Zimbabwe was struggling to breastfeed – she knew only too well how difficult it could be. As we look forward to Mother’s Day, she shares her own breastfeeding story and explains how you can help more mums get the specialist support they need by donating this Lent.

It’s 10pm and I’ve been breastfeeding my daughter Rosa on and off for the last five hours. Rosa was born two weeks ago, and every time she tries to feed, which is about 10-12 times a day, my body tenses with pain. At times, its so painful, I cry out. And she rarely seems satisfied. I don’t know how much more of this I can take. And I’m worried that she isn’t putting on weight.

Later that night, I remember that I was given a bunch of leaflets, including information about a breastfeeding support group a short walk from my home in north London. Later that evening, I dig them out, and make an appointment for the next available session.

The support I receive is life-changing. A trained counsellor spends time with me, demonstrating the exact positioning needed to get a good latch. She checks how Rosa is feeding, reassures me that she’s healthy, and tells me to come back to the support group whenever I need to. It takes some time, but after a few more weeks, breastfeeding is second nature for both of us.

I breastfed Rosa for one year – before she chose to give up herself. I am one of the lucky ones. But I couldn’t have done it without the help of a specialist breastfeeding counsellor.

According to the World Health Organisation, only 40 per cent of infants under six months of age are exclusively breastfed globally. And if breastfeeding were scaled up to near universal levels, about 820 000 child lives would be saved every year. But unfortunately, many new mums, especially those living in poverty, don’t have access to the knowledge or support they need.

Thanks to support from CAFOD – this is starting to change. When 20-year-old Unity, from Zimbabwe, gave birth to her son, Twalumba, she didn’t know about the benefits of breastfeeding. “I had difficulties feeding,” she says. “My child was so small, I just held him any way I thought. But he had problems. Sometimes the milk spilled out of his mouth or came out of his nose. It’s difficult to know your child is sick or not feeding well. It’s painful to see your child suffer.”

A lack of awareness in countries like Zimbabwe, often means that mums like Unity try to give their babies food before they are six months old. CAFOD is funding a project that trains older mums in Unity’s community in breastfeeding, weaning and nutrition so they can set up support groups for new mums.

“I heard about the group through my friends,” recalls Unity. “They taught me how to position my child for breastfeeding and that you should exclusively breastfeed your child for six months. Without the group, I would have given my child other foods because he wasn’t feeding well. If I’d been feeding him porridge instead of breastmilk, maybe he would be stunted by now.”

Watch Unity describe how she was helped by Mavis and the  New Mother’s Support group:

The benefits of breastfeeding are undisputed. Research proves that it is especially critical during the first six months of life, helping prevent diarrhoea and pneumonia, two major causes of death in infants. And mothers who breastfeed have a reduced risk of ovarian and breast cancer, two leading causes of death among women.

At five months old, Twalumba is thriving. His chubby cheeks and legs say it all. “I’m no longer afraid of breastfeeding”, says Unity. “When I put him on my back, I can feel he’s a good weight. I’ve found peace of mind. I know my child is well and healthy.”

Many new mums like me and Unity blame themselves when they are struggling to breastfeed. And without help, it’s so easy to lose confidence and look for alternatives. And in the poorest countries – alternative food can damage a child’s health for life. But for many of us, breastfeeding is a skill that needs to be learned. And we need a good teacher. But there are so many more new mums that need our support.

What can you do in Lent to help CAFOD?

You can still Donate to CAFOD’s Family Fast Day Appeal today to help more new mums like Unity get the help they need for their children to thrive.