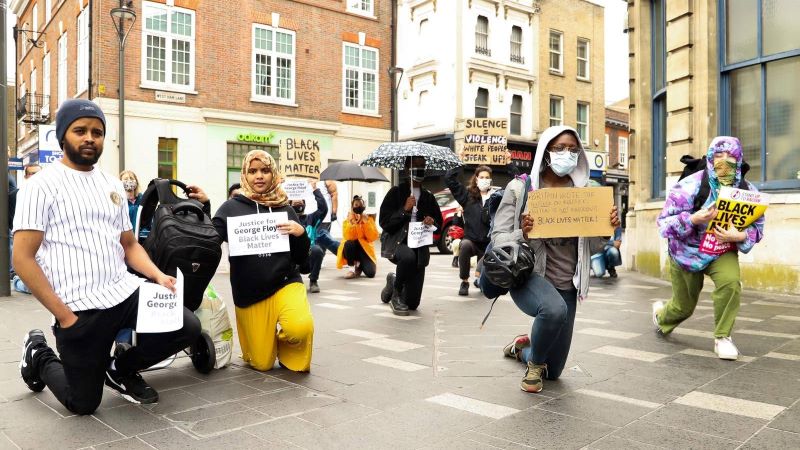 George Floyd was laid to rest this week and the world rightly continues to speak out as one against racism. Sam Aidoo, a member of CAFOD’s campaigns team, gives a personal reflection on injustice, racism and how her faith motivates her work.

I really struggled with work last week. Not just because I’m working from home and my kitchen table is just not suitable for this. Last week was really heavy and as I start another working week, I still feel like I’m carrying the weight of the violent and protracted killing of George Floyd.

We are all feeling trauma

A week and a bit after the killing of George Floyd, I protested on the steps of Stratford Town Hall in East London. A handful of us were gathered. We hadn’t forgotten that we are in the middle of the coronavirus pandemic. We all wore masks and distanced as much as possible. But we came to add our voices that day, just as millions of people around the world are doing too. We were just a group of normal, working class, unremarkable people of all races who came together because we are sick and tired. And witnessing the breakdown of US society is making us all feel trauma.

For those of us who are of BAME decent, especially black, I know I can safely say that George Floyd’s killing is trauma. And there are countless others who have reached media attention, familiar and maybe unfamiliar. Stephen Lawrence’s unsolved murder is also trauma. Amy Cooper’s police threat is trauma. Ahmaud Arbery’s shooting is trauma. Belly Mujinga’s case closed is trauma. Mark Duggan’s killing is trauma. Marielle Franco’s assassination is trauma. I feel pain and trauma seeing people who look like me losing their lives and their dignity to the state and the system.

But there is power in trauma, and that was why we gathered together amid a pandemic.

Racism is a sin

My faith has led me to work for CAFOD as a campaigner. I believe that Jesus is a role model, a true restless champion of justice, and I am proud to see his mission at the core of the work that I do.

So when a great injustice like racism refuses to die, I can comfortably say that it is incompatible with God. As the events of the week unfolded, I was proud to see that the Church spoke out in so many ways. Fundamentally, the Church said in clear and plain language that racism is a sin. Not only is it intolerable, it is not to be tolerated.

As I continue trying to navigate work – answering emails, making sure I’m not muted on Zoom – I felt solidarity from colleagues. They reached out, they shared quotes, they opened themselves to learning and unlearning. It feels like there has been a shift in global consciousness. I hope there is at least.

We work to fight injustice

I was not just affected by the killing of George Floyd as a black woman, but as a campaigner too. I work with communities and campaigners overseas as well as here in the UK to bring to life CAFOD’s mission to challenge injustice and to rebalance power. We work to shed light on how poverty is political. We know that the roots that underpin poverty are the same roots that underpin racism – how countries are kept in poverty because the system is fixed in the direction to prop up the global north.

The heinous public killing of George Floyd, the stories of all those who have lost their lives due to racial violence, and the public response, shows us very clearly that the world is no longer waiting for the apathy of global systems, which at their very root are designed to exclude.

In contrast, at our root we are faith filled. We are committed to advocacy and campaigning, confronting the problems of hate, racism and discrimination – calling out injustice for the world’s poorest people, the most vulnerable, the displaced, the excluded.

I believe we have reached a moment, but not for the first time, where organisations like CAFOD can lead the way in re-wiring our societies and transforming lives.

Help us protect the most vulnerable people from coronavirus

Hope as we go forward

Pope Francis tells us: “We cannot tolerate or turn a blind eye to racism and exclusion in any form and yet claim to defend the sacredness of every human life.”

He is telling us we have an opportunity to lead the way in setting the agenda for a just world. But this must include:

We may fumble, we may not know what to say, we may worry we’ll offend, we may have to ask questions, we may have to be silent, and we may be challenged, but as Catholics, Christians, global citizens and human beings we must see our commitment to fighting injustice as a commission to anti-racism and all that’s in between.

My hope stands in love, action, dignity and respect for all. We cannot take up the challenges by ourselves. We need to act in communities, within parishes and the wider Church, with families and friends, to fight every single form of injustice as though they are one.

Get involved as a campaigner with CAFOD