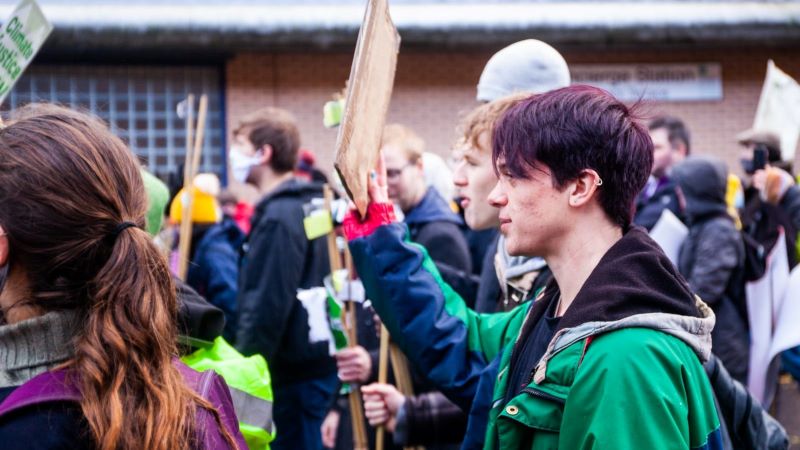 Matty Maslen and Sophie Pereira were young delegates representing CAFOD at COP26. They share what it was like to travel to the UN climate summit in Glasgow, where they joined us in demanding action from our leaders on the climate crisis.

Matty: We were among hundreds of thousands of people who had travelled from all across the globe for the conference. While some of the CAFOD group got up at 4am on the Friday to begin their journey, I had it easy: I live in Glasgow.

Sophie: Arriving at Glasgow central station, I was in awe of the huge protest that greeted me, demanding climate justice. It was quite intimidating to know I was going to be participating in that same protest the next day.

The group walked together to the Green Zone, which was in the Science Centre – a museum in the south of the city, overlooking the River Clyde. More than 100 organisations and 11 sponsors hosted events, exhibitions, cultural performances, workshops and talks.

Sophie: I got the chance to engage in talks about the importance of saving the environment, play some fun games and chat to multiple radio stations and tv crew about why young people should be heavily involved with COP26. I really enjoyed the Green Zone as a great way to listen, learn and celebrate climate action.

Matty: For me there was an element of green-washing in some of the stalls. The canteen, on the other hand, was exactly what I expected: groups of people talking excitedly over laptops and notebooks, and vegan soup. This was where the action was.

A 24-hour vigil for the climate

In the evening we walked through the city centre to the Ignatian Spirituality Centre for food and a debrief of our first day. We then headed over to St Aloysius Church, where members of CAFOD ran a service as part of the ‘24 Hours for the Climate’ vigil, which was live-streamed from all across the world.

It was strange sitting in a cold church, knowing that people I’d never met, in countries I’ve never visited, were listening to the same voices read the same prayers as me.

Sophie: I really enjoyed the liturgy, it was an absolutely magnificent church. I had the opportunity to be involved personally in the liturgy, reading the bidding prayers. Being with other delegates made me feel really welcomed and grateful.

Speak up for change – be a CAFOD Champion!

At the climate march

Matty: Saturday was the big one. I joined the rest of the group in Kelvingrove Park for the Climate March.

Sophie: This was probably the most significant part of every delegate’s journey at COP26. We had to march in a specific order, with CAFOD among the faith groups. Unfortunately, that meant 2 ½ hours waiting in the torrential rain and cold. At that point, all of our placards had been destroyed by the weather. The hope and determination we began with slowly faded. But once we started to march and make some noise, I suddenly felt like I could walk for hours, as if God had given me back all the joy and energy I felt before.

Matty: This was my highlight of the weekend. To be part of a movement as energetic, as urgent and as important as the climate movement is inspiring. From 11am to 4pm we were surrounded by people who all agreed on one key thing: we must work together to stop the climate crisis. The Glasgow protest was huge, one of 250 that took place that day across the world.

Leaving with hope for the future

Sophie: In the evening we had a talk from CAFOD’s COP delegates from the Blue Zone, where the key negotiations between world leaders take place. Only certain organisations may access this space. We spoke to Neil Thorns, Head of Advocacy; Robin Mace-Smith, Policy Analysist for Climate and Energy; and Frances Leach, Press Officer.

Matty: It was interesting to hear more about how the official conversations and mechanisms work in a UN conference like COP. For three days every conversation I had – whether it was with other young people in the CAFOD group, people I met in events and workshops, people I met on the street who just started conversations – left me feeling hopeful.

It’s easy to be overwhelmed in the face of a crisis as large as this one, especially when those we ought to be able to trust to do the right thing on our behalf continuously fail. But perhaps we’re looking at it wrong. Again and again I was reminded that it wasn’t just the Blue Zone that mattered. It was outside. It was in the streets. It was in little rooms across the city, across the world where ‘ordinary’ people were having extraordinary conversations. Change isn’t always top-down – in fact, important changes rarely are.

Sophie: We ended the trip with a Mass at St Aloysius’ church for the Conference delegates. Every single pew was full, and there was a beautiful choir. It was a lovely way to end my trip to COP26, surrounded by so many Catholics with the same faith-driven conviction: we should all care for the world we live in.