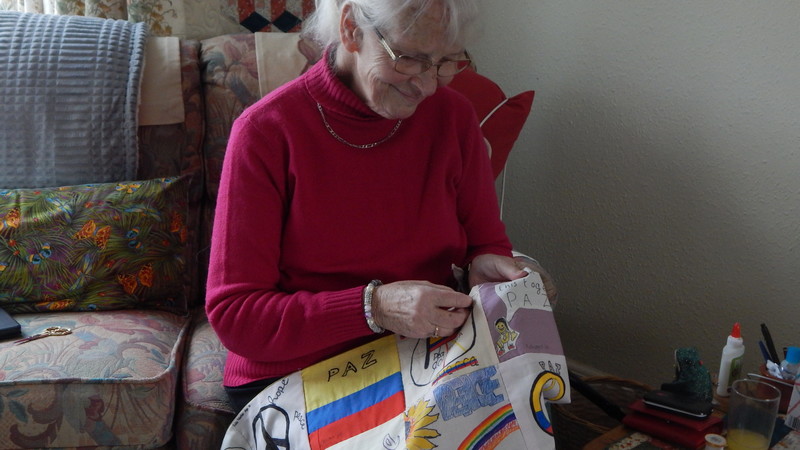 Gloria is a longstanding member of the St Georges CAFOD group in Norwich, Norfolk.

The CAFOD group at St George’s parish in Norwich, Norfolk, has been standing in solidarity with communities overseas for years. The parish group holds events every month of the year, including fundraising events such as marmalade sales, parish lunches and Christmas lucky dips. This Advent they also sold two nativity sets, which they made out of fabric.

Earlier this year they decided to work together with young people – from the parish Scout groups and students at the Notre Dame High School in Norwich – to raise money for work CAFOD supports in Colombia.

Gloria, a long-standing member of the group, told us that they were really interested in the Hands On Magdalena Medio project because it was all about peace – young people bringing peace and change to their society.

Together, they decided to create a patchwork wall hanging to express their love and solidarity.

Join us in praying for peace

Gloria said: “Our group loves sewing, but what we enjoyed most of all was working with the young people’s designs and turning them into fabric. The inspiration behind the project was the importance of peace, and we could see how deeply and carefully the young people had thought about it. It took us six months, during the pandemic, which wasn’t easy!”

“The wall hanging is a beautiful piece of work. What I most admire about Gloria and the group is that, once they’ve given a gift, they recognise that they don’t own it anymore – they’re very happy for our friends in Colombia to use it as they think fit. All they want is for them to know that their sisters and brothers in Norwich care for them, pray for them and wish them well.”

Gloria added: “As the squares on the wall hanging so clearly say, we wish our sisters and brothers in Colombia peace, prayers, love – and more love. We will not forget you.”

Unknown to the parish group in Norwich, on the other side of the world in Colombia, a group of women had been gathering as part of the Hands On Magdalena Medio project, creatively responding to the need for peace.

For over 50 years Colombia has suffered from an internal armed conflict. More than a million people have been killed and more than 8 million forced to flee their homes. However, just over five years ago, a peace deal created an opportunity for people to build peace in their communities.

Pray for the gift of peace

This peace is, however, fragile, and the conflict has worsened. In the Magdalena Medio region, an area rich in culture and natural resources but with high poverty rates, the group of women met as part of a process to increase their commitment, as female leaders and human rights defenders, to collective peacebuilding initiatives.

This process enabled the women to reflect on their ability to transform themselves and those who live in the region, and to break with paths of violence – putting women at the centre of reflections on peace and the community, and on respect, love and tolerance.

Sara Harrera, one of the group members, shared: “First of all, to have identified ourselves as defenders of rights – this was very important, to give recognition to the female leaders who were sharing there. It was great to be recognised for the work we have been doing for a long time.”

The women wanted to express their conversations and reflections creatively, through weaving, embroidery and sewing. Eventually, they produced a large patchwork quilt that they called “Sewing Voices for Peace”. It shares their cultural, political and spiritual identities and represents the loving act of care between women, their stories of resistance to the events of the armed conflict, their longings, hopes and dreams.

There is a striking resemblance between the Colombian patchwork quilt and the wall hanging from Norwich – both have responded to the need for peace and reconciliation in creative ways. As Jane said: “What amazes me is how the groups have independently come up with such similar projects.”

In the new year, once travel is permitted, the wall hanging will make its way to Colombia, as a physical expression of love and peace. And also in the new year, the groups from Norwich and Colombia will meet virtually – to share their inspirations, hopes and dreams.

On this 4th Sunday of Advent, let us light the candle of peace as we pray for all those affected by conflict.

Pray for peace with us