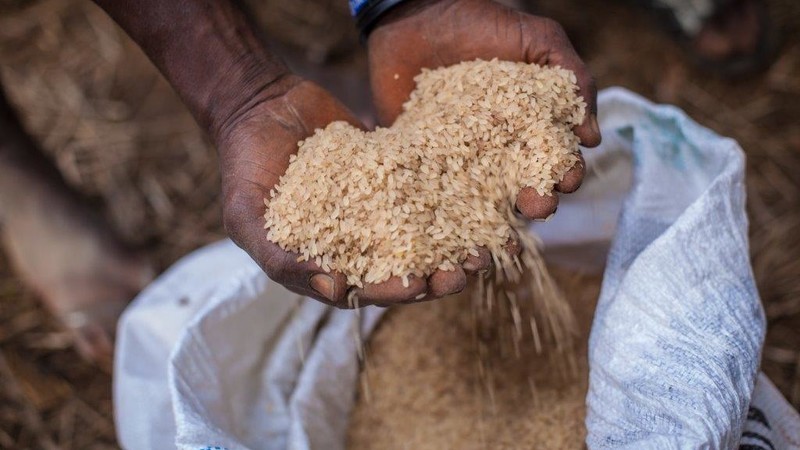 Francis Stewart from our Theology Programme further explores the lessons the Bible has for us as we try to reimagine the food system.

The first blog in this series explored some harsh realities of farming, which are reflected in the book of Genesis. It shows the growth of vast agricultural empires, comparable in some senses to our modern food system. At the beginning of the book of Exodus, the people who exchanged their nomadic herder livelihood for the grain of Pharaoh’s Egypt have now become slaves.

Yet this is not the end of the story. I invite you to read on as we continue to re-imagine the food system.

It is once the Israelites are liberated from slavery in Egypt that, as desert-wanderers, they begin to imagine a different food economy. Visions of a different way of living are born from their shared struggle in the wilderness and their yearning for a land of their own, flowing with milk and honey. Glimpsed in some of the laws of the books of Exodus, Leviticus and Deuteronomy, is a way of living that does not necessitate slavery, over-exploitation of the earth, or vast inequalities of power.

According to Exodus, once the Israelites have fled Egypt, they are wandering in the desert for 40 years. It doesn’t take long before they start to get hungry. Despair begins to set in: “If only we had died by the Lord’s hand in Egypt,” they cry. At least in slavery they “sat by the fleshpots” of their slave masters and ate their fill (Exodus 16: 1-3). Listening to their grumblings, the Lord promises to rain a miraculous bread from above – manna.

The Israelites are commanded to take only what they need, the same amount for each person in each tent. The manna does not keep overnight. Only on the sixth day of gathering are the Israelites commanded: “Tomorrow is to be a day of sabbath rest, a holy sabbath to the Lord. So, bake what you want to bake and boil what you want to boil. Save whatever is left and keep it until morning.”

The logic of these lessons is the polar opposite to that of Pharoah in Egypt. He could not tolerate a pause in production, let alone an economy of frugal gleaning of what the Lord gives, day-by-day. This vision of economics becomes crystalised in the “Jubilee Laws” of Leviticus 25. These laws anticipate how society, even with the most egalitarian foundations, will tend towards injustice, will backslide towards Pharoah’s logic.

So, the Israelites are commanded to honour periodic times of rest for the land every seven and 50 years. These are known as Jubilees. They are also an occasion to restore social life and correct the accrued inequalities through debt cancellation, the lifting up of the poor, the liberation of prisoners and the return of slaves to their homes. The Laws also instruct more regular practices like not harvesting crops at the edges of the field, or leaving any that are accidentally dropped, so that marginalised people can glean what they need.

A different relationship with the land

What lessons can we “glean” from these ancient texts for today’s world? The wandering Israelites may seem a mythical, larger-than-life community. Nonetheless, there are many people in today’s world whose preferred livelihood is nomadic and communal.

I have recently had the privilege of talking on Zoom to some people who work for Caritas Maralal, a local Church organisation in Northern Kenya. In this part of the country, the Samburu people are a significant population.

The Samburu are pastoralists – nomadic herders of livestock. Their way of life has sustained them for generations and they tread lightly on the earth. They herd animals from pasture to pasture to graze, rather than intensively exploiting the soil. They know how to build livestock enclosures from stripped tree branches, to reduce deforestation. In various ways they have made creative use of limited ecological resources for sustenance. This lifestyle has also nursed a deep knowledge of seasonal rhythms and weather patterns and a sense of give-and-take with the land.

However, in times of drought, the pastoralists have no safety net. The prolonged droughts of the last few years, wrought by climate change, have depleted the livestock. This has rendered the herders more reliant upon bought products. The erratic weather and disruption of the seasons is also a rupture in their previously reliable indigenous knowledge. There are other pressures on their way of life too, like the tendency towards privatisation of land and resources. This leads to greater competition for pasture and therefore conflict.

This year, Samburu people face, along with millions around the world, severe hunger and malnutrition. Up to 20 million people in Kenya, South Sudan and Ethiopia are facing this reality. They are having to leave their homes or use their life savings to survive. While children are losing out on their education.

In a situation that feels so hopeless, I wonder if the stories of the ancient Israelites could aid us in imagining a more hopeful future for food production. The book of Exodus also tells of a once nomadic people, who saw right through the promises of large, mass-producing empires. They fled, but could not wander forever in the arid wilderness. Yet neither did they want to end up like Pharaoh and his  slaveholding empire, only focused on storing-up grain at the expense of people and the earth.

In the face of these challenges, the Samburu herders are seeking to diversify their livelihood, cultivating crops alongside their livestock-keeping. They are also integrating their indigenous knowledge with modern scientific inventions. Stoves that use earth as a fuel rather than wood have created possibilities for a stronger role for women. The women are more used to cultivating crops, and no longer have to make difficult and dangerous trips to collect firewood. Yet, because of the sheer urgency of the chronic food crisis in East Africa, to make these adaptations will require a global support-network.

Our faith, which draws us into the dramatic stories of the people of God in the desert, won’t offer ready-made practical solutions to chronic food emergencies. The people and communities themselves know what is best for their livelihoods, drawing on the best of scientific and traditional knowledge. The book of Exodus and similar stories can offer a deep promise that a different social vision can be wrested from intense difficulties of the desert. Thus, from our faith can come hope, very different from optimism or complacency. It is easy to simply criticise industrial-scale food systems. But our calling on this earth is not only to “uproot and tear down”, but also “to build and to plant” (Jeremiah 1:10), to seek out a different way, a different relationship to the land and to each other.

It is now our turn to do the same.