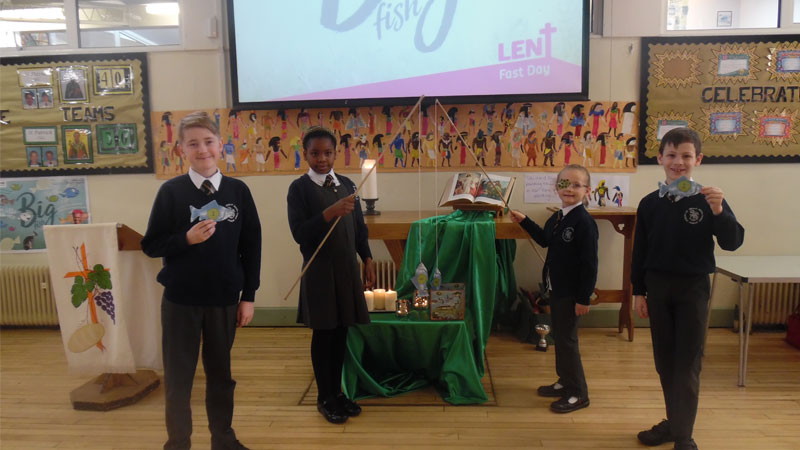 Find out how CAFOD school volunteers Patrick and Isobel from the Portsmouth diocese have been inspiring children with stories about Florence and Bob the fish in Zambia this Lent.

“ It is truly heart-warming that our children have the ability to understand hardship, see injustice and unfairness and appreciate that they can play a practical part in making life for others just a little bit fairer.”

We were introduced to ‘Bob’ the fish and Florence at our school volunteer training day in February, and we were impressed by the story and the idea of this project. The theme for this year’s Lent Fast Day was ‘Turn little fish into Big Fish’ and it focused on a community in Zambia which has been supported by CAFOD, working with local, expert partners, Sister Yvonne and The Sisters of the Sacred Hearts of Jesus and Mary.

Bob the fish really appealed to the children, and we were inundated with volunteers when we asked for children to help stock our ‘bucket-pond’ with tiny fish. Children came up with a wide variety of fundraising event ideas which included buying little fish to fill a net, covering a large cut-out of ‘Bob’ in coin scales and paying to wear odd-combination clothes in school.

See how children and young people have been fundraising this Lent

One school had made fantastic preparations ahead of our assembly by creating a huge pond on one of the walls, and all children had taken a cut out fish home to decorate and write a prayer on it to be brought back on Fast Day. The fish would then be added to the pond or suspended from the ceiling to create a massive mural and 3D underwater scene.

During the assemblies, we took time to relate the fish farming of Florence with a link to the Gospels. Fish were a source of nourishment and means of making a living for many of the first Apostles. In Matthew’s Gospel we hear about Peter, James and John who had been fishing all night but had caught nothing. Then, Jesus joined them and told them to try again, and put out their nets on the other side. They were rewarded with nets so full of fish that they were nearly bursting. Jesus told Peter that he would make him a ‘fisher of men’. The symbol of the fish has been used for centuries as a symbol, sometimes a secret one, of followers of Christ.

One school had an inspired idea to highlight their continued support of CAFOD. Their 2016 ‘Make a splash’ art display has had pride of place in their library area since Lent last year. They will create ‘fish scales’ from that art-work and will sell the ‘scales’ to decorate a small fish, a medium size fish and a very large fish throughout this Lent.

Another initiative that continues the theme of turning little fish into big fish was the coins in a fish bowl idea. Each class has a fish bowl and children put their pennies, or whatever they saved through fasting, or giving up crisps, fizzy drink etc. into the bowl. The fish bowls are offered in prayer at their Monday assembly. The proceeds are emptied and the bowls returned to the classes for the next week’s donations. The children will see how their small, weekly savings will build up to a large, significant donation at the end of Lent.

It never ceases to amaze us that the children relate so readily to the work of CAFOD in the various projects around the world and the manner in which they empathise with the plight of the families and communities. They seem to understand the difficulties of their situation and the injustices. With Florence and her family, they could see how the simple little fish could grow into big, nourishing fish that would change lives for the better. They also remembered previous assemblies where the importance of having sufficient money to send the children to school was explained. In this CAFOD PowerPoint, the picture of’Bob’growing into a massive fish really amused and engaged the children.

It’s not to late to join in! Visit our webpages to download our Bob the fish Lent resources

Throughout all of the fundraising efforts, prayer is offered for the families and communities which are being supported, as well as for those who work for and support CAFOD. It is truly heart-warming that our children have the ability to understand hardship, see injustice and unfairness and appreciate that they can play a practical part in making life for others just a little bit fairer. They see that their small actions and sacrifices make a huge difference to families like Florence’s. May God bless them all.

Thank you so much to our team of school volunteers across England and Wales who have been inspiring children and young people to get involved in our Lent appeal. You are all amazing!