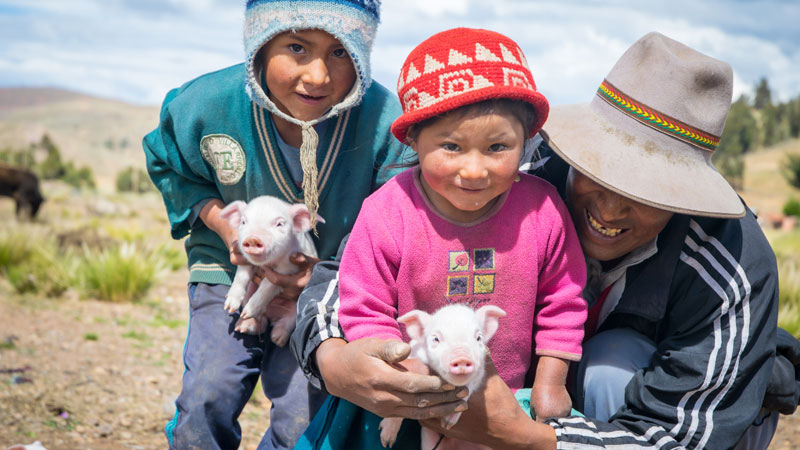 Thanks to your donations, Bernardo now rears piglets and can sell them to pay for his children to go to school

Your Harvest donations are a vital lifeline for people all over the world. Last Harvest we introduced you to a community in Bolivia and invited you to join them in their journey towards an abundant harvest. One year into the project, Nikki Evans, CAFOD’s Bolivia Programme Officer, revisits one of the families you have helped.

Your donation can sow an abundant harvest

I first met Rosa Mamani and her four small children in 2016. I was visiting families that had just joined CAFOD’s Hands On project in the highlands of Bolivia near Lake Titicaca.

Why are your donations needed?

Many of the poorest rural farmers live in this area known as the Altiplano. Nestled high in the Andes mountains at over 12,000 feet, this plateau is arid and the farmers live at the mercy of the unpredictable and challenging weather.

Rosa’s husband, Bernardo, had migrated to Argentina three years earlier. It seemed the only solution for a family that couldn’t grow enough from their land in these difficult conditions. He left his wife and four children behind, sending them money from afar.

The family missed him.

Migrating is painful. Families in desperately difficult situations separate and even if a family earns a little more income this way, in other respects they become more vulnerable.

What is CAFOD doing?

CAFOD supports a local organisation called Fundación Nuna that provide technical support to indigenous farming families in the region. Their staff, Eva and Mauro, took me to visit Rosa.

Rosa spoke quietly in Aymara – a local indigenous language – making little eye contact. Her children were also shy, hiding behind her rather than running around with the curiosity you so often see in young children.

My visit was during rainy season but Rosa’s land was parched. There were few crops growing and just a handful of chickens roaming around. Rosa seemed on the brink of defeat.

How is the project helping Rosa?

The task for that day was to start sowing crops in her new vegetable garden. Fundación Nuna had already helped Rosa to build the walls of the garden and plough the soil ready for planting. Mauro patiently explained in Aymara the best way to sow onions. Together, they planted row upon row of seedlings.

For Rosa to join the project required a leap of faith and a lot of commitment at a time when she was feeling defeated. For families living in such precarious situations, changing their farming techniques is a big risk that many are reluctant to take. They fear they could end up with nothing. Rosa had to trust that Fundación Nuna’s project would help her feed her family and not leave her without food.

What progress has been made?

This year I visited Rosa again and was blown away by the change – a chicken coop and pigsty have been built, a vegetable garden and potatoes planted. Rosa told me she has sold some crops to pay for her children’s school costs.

While we often measure the quantity of crops as a way of ensuring that the project is working well, the big difference I always look for is in the people themselves. Rosa and her children had blossomed since our last visit. They told us they were eating a lot more vegetables and you could see the difference in energy as the children ran around the farm. Rosa smiled throughout the visit. With a twinkle in her eye, she talked about the plans for her farm that she had not even dreamt of when we first met.

The biggest surprise waiting for us was Bernardo himself. Thanks to the project and Rosa’s hard work, the family’s homestead is now producing enough food for Bernardo to return home.

Now Rosa, Bernardo and the staff of Fundación Nuna are working together to build a water cistern. The hard work for this family is not over, but this story has taken a happy turn.

Donate to CAFOD’s Harvest Fast Day Appeal and give more families the expertise they need to farm in our changing climate.