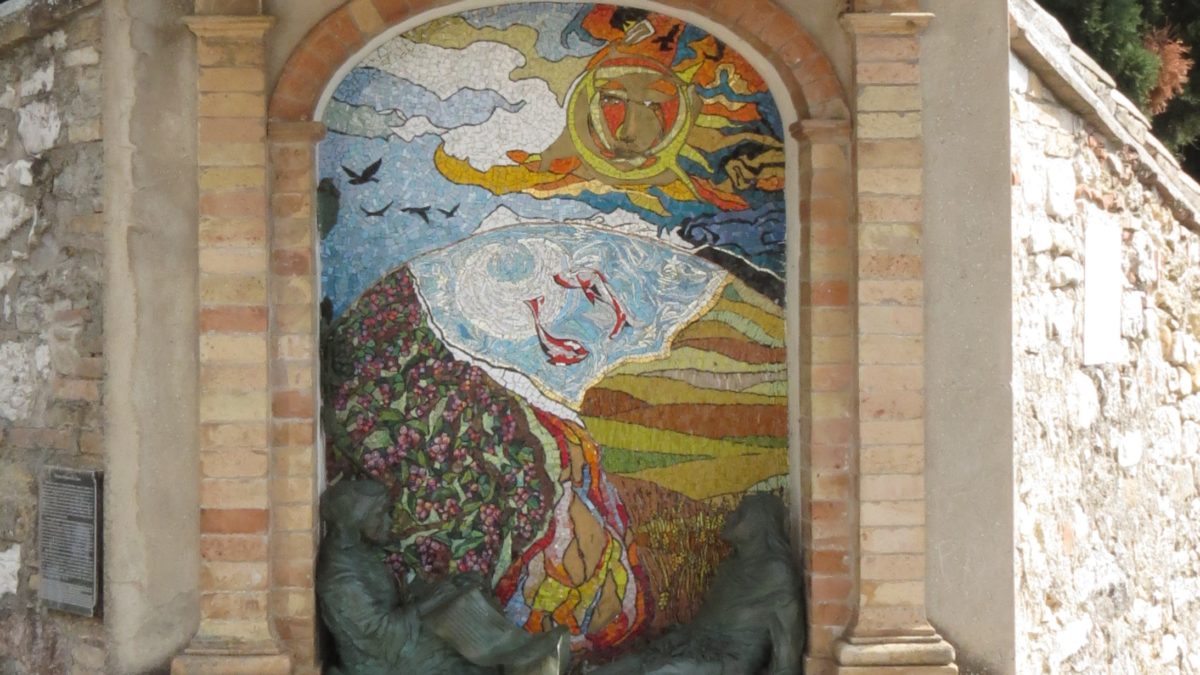 Sculpture on the path to San Damiano, Assisi, illustrating the Canticle of the Creatures

On the Feast of Saint Francis of Assisi, Kathleen O’Brien from our Theology team explores the saint’s Canticle of the Creatures, used in our nine-day prayer vigil ahead of the Amazon Synod in Rome.

Saint Francis of Assisi is one of our best-loved, but arguably also one of our least-understood, saints. His radically simple way of living the Gospel challenged his contemporaries and can still challenge us today, if we allow it to do so.

Francis lived in poverty, dressed in ragged sackcloth, joyfully depending on God’s providence. He loved God passionately, with his whole being, and would frequently pray all night. He was inspired to serve the poorest and most excluded after embracing a man affected by leprosy, in whom he believed that he had embraced Christ. He rebuilt ruined chapels with his bare hands, taking literally a call from God to “Rebuild my church”. He travelled across Europe and beyond to preach the Gospel, even meeting with the Sultan of Egypt in 1219 during the Fifth Crusade, at risk of death.

By the time Francis died, aged just 44, hundreds were opting to follow his lifestyle as Franciscan friars, as Poor Clare nuns or in the Franciscan Third Order for lay people.

And yet most know him only as the patron saint of animals.

Francis is often depicted with doves or a tame wolf, partly the result of two stories in a 14th-century text called the Little Flowers of Saint Francis, in which Francis preaches to the birds and tames a wolf that is terrorising locals near the town of Gubbio.

But those stories grew out of a revolutionary attitude towards creation that imbued Francis’ life and all that he did. He saw creation as a mirror of God. Every aspect of creation, every blade of grass, was a gift. Centuries later, “The Call of Creation”, a document by the Catholic Bishops of England and Wales in 2002, said: “Nature reveals God to us and allows us to experience God’s presence.”

Francis regularly erupted into praise of God, unable to contain his joy at God’s presence all around him.

Writing the Canticle of the Creatures

When lying sick in 1224, being cared for by the Poor Clares at San Damiano in Assisi, Francis dictated the Canticle of the Creatures (also known as Canticle of the Sun). In it, he named sun and moon, wind, water and fire as his brothers and sisters. He praised God “for our sister Mother Earth, who sustains us and governs us.”

Legend has it that the final verse praising Sister Death was added by Francis in 1226, shortly before he died.

More than a hymn of praise

I think that the Canticle of the Creatures is much more than an amazing hymn of praise: it is almost a mission statement, one that explains Francis as no scholarly tome ever could.

His awareness of God’s presence in creation was utterly transformative. Francis could never be the same again once he realised God’s presence in a man affected by leprosy, when up to this point he had despised, feared and avoided such people. And once he recognised God in that most unlikely of places, he could not help but see that God was everywhere. And if God is everywhere, what joy and wonder! From then on Francis lived in a different world.

Pray our novena to St Francis ahead of the Amazon Synod﻿

We too can be transformed

In fact, a fundamental of Catholic spirituality is “the sacramental nature of reality” – the truth that God uses all of reality to reveal himself to us. If we really believed, understood and were aware that God in Christ chose to be part of creation, our lives too would be transformed. Like Saint Francis, caring for creation would no longer be a list of dos and don’ts. Instead, we would have an inner compulsion to live every moment in harmony with every thing and every person that is part of creation.

In 1979, Pope Saint John Paul II declared Francis the Patron Saint of Ecology. Let’s ask his help to care for our common home and its people. Transformed by faith, may we work with and serve the poorest and most excluded people as Francis did, until the whole of creation “obtains the freedom of the glory of the children of God” (Romans 8:20-22).

Celebrate Family Fast Day on the feast of Saint Francis