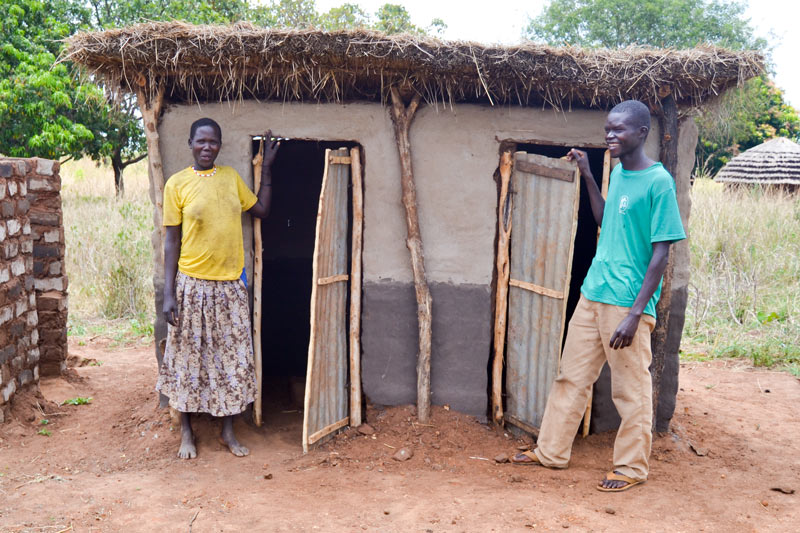 Monica and Samuel outside their new toilets.

Today is World Toilet Day. Abigail McMillan, in CAFOD’s South West and Wales team reflects on how the humble toilet is an often overlooked life-saver.

Toilets are generally a private subject; my mum would say not to be discussed at the dinner table. But professionally, World Toilet Day makes perfect sense to me. The world can be changed by toilets, and the Church takes toilets very seriously.

Keep a community safe with the gift of a toilet

Following the tremendous response of Catholic parishioners in England and Wales to CAFOD’s Family Fast Day Appeal during Lent 2016, the UK Government doubled the nearly £5m that was donated by the general public. With this, we were able to instigate a water, sanitation and hygiene programme in the Democratic Republic of Congo, Uganda and Zimbabwe.

In Uganda, the programme has involved working closely with priests and local leaders in the Catholic Church. While travelling to remote areas in their parish, priests tell people how to plan for more toilets in a village, how to maintain them and why sanitation in their community is important. Toilets feature in homilies and prayer days, as well as in general chats to local families and more formal training sessions.

Toilets are at the centre of a complicated development picture, one which takes the time and patience that is abundant in the Church to help people flourish. Building a toilet can be relatively easy with the right tools and knowledge. But the benefits can be short-lived if toilets get washed away in heavy rains, or crumble in drought. Or, in fact, if no-one wants to use them.

CAFOD’s programme in Uganda has been hugely successful. It has been led by the community and is not a short-term fix.

The village with just one toilet

In Madi Opei village in the north of Uganda, there used to be just one toilet in the whole village. The local water source was 5km away. It was dirty and outbreaks of illnesses such as diarrhoea were frequent. Illness is, of course, unpleasant in itself, but it is also a huge strain on family finances. When you’re struggling with this sort of illness, working is very difficult. Without work, there is no income.

Samuel and his wife Monica live in Madi Opei with their six children. Samuel explains that as a village they received training from Caritas Gulu, the local Catholic organisation, funded by CAFOD. Then the villagers planned where toilets should be placed and how they should be built.

Caritas also supported Samuel and his neighbours to set up a water and sanitation committee, so they can take control of their own health and wellbeing, and make sure they are working for the common good of the village. Recognising that women have different needs to men, the committee is made up of five men and five women.

Children in the village have also taken part. Schools held meetings with children, parents and teachers to discuss the importance of toilets and how to make sure they are available to everyone.

Children are powerful advocates of toilets and have a great repertoire of songs, drama and dances which they have learnt at school. They use their performance skills to great effect to encourage their parents and the wider community to install toilets and good hygiene. The children know that the fewer days of education they lose to illness, the better. The more days their parents can work, the better.

“There is much less illness now”

The huge success of Madi Opei is that they now have a toilet for every family.

Samuel says: “All 66 homes in the village have now got a toilet which works. We have some other hygiene facilities too like bathing shelters. There is much less illness in the village now, so it is a huge success.”

He continues, “as a committee, we make sure we all keep to the weekly workplan of maintaining and cleaning the toilets. We also have a plan for building new ones when these are full and fixing any that we need to.”

Inspired by these successes, local committees and school groups have gone a step further. They are now lobbying their local politicians to make sure the authorities support the building and maintenance of toilets in Uganda.

Madi Opei is just one village where toilets have transformed life.

Across Uganda, together we have built 1,914 toilets in the last two years. Plus, a total of 44,000 people in Uganda have received training on hygiene and sanitation, thanks to your donations to the Lent 2016 Appeal.

These amazing people have been hugely successful and are appreciative of your support.

The last word goes to Mr Samuel: “Thank you for all the support.” Happy World Toilet Day.

Toilets are the best way to stop the spread of serious diseases and to keep whole communities safe and well – give one as an unusual Christmas Gift!