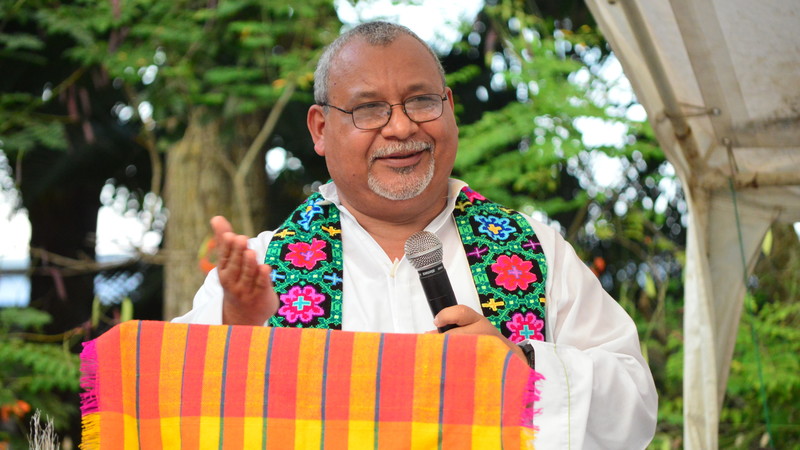 Father Melo is the Director of CAFOD’s longstanding Church partner ERIC-Radio Progreso in Honduras, which works on communications and research focusing on migration, integral ecology and defending human rights. As ERIC celebrates its 40th anniversary, Father Melo talks about the current situation in Honduras, the impact of coronavirus, his ideas for an alternative development, the organisation’s achievements and their hopes for the next 10 years.

END_OF_DOCUMENT_TOKEN_TO_BE_REPLACED

Hannah Henley, who is currently taking part in CAFOD’s Step in the Gap, writes this report about meeting an inspirational mother and son in Ethiopia. She explains how with the help of CAFOD’s local partners, people are not only living but thriving with a HIV positive status.

The first few days of our Ethiopian adventure have been full of inspiration, admiration and flavour. We have been staying with CAFOD partners, The Daughters of Charity, in the Ethiopian capital Addis Ababa.

I think I can speak for the whole group when I say we couldn’t have wished for a warmer welcome – and that’s nothing to do with the 27 degrees weather. We have been lucky enough to spend time three wonderful sisters, CAFOD staff, and are getting to know our driver Soloman.

The Daughters of Charity run a HIV and AIDS clinic. The project provides testing for HIV, a HIV prevention programme, financial support, heath and sanitation training and business training.

END_OF_DOCUMENT_TOKEN_TO_BE_REPLACED

Madison McCulla works for one of CAFOD’s partners in Uganda, supporting people living with HIV and AIDS. She reflects on the achievements that have been made since the 1980s.

With more effective methods available and reduced costs for HIV prevention, testing and treatment, a world without AIDS becomes more realistic. However, a lot of work still needs to be done for these ‘ifs’ to be achieved.

Sign up to CAFOD’s e-newsletter for monthly updates on tackling poverty and ways you can be involved. END_OF_DOCUMENT_TOKEN_TO_BE_REPLACED

Tania Dalton works in CAFOD’s Latin America Team. As we celebrate the success of our two year water project in Kitui, Tania reflects on the long-term development projects she’s been part of in her time with CAFOD, and their ongoing impact today.

I am blessed to work in CAFOD’s Latin America team: my life is constantly enriched by the people I encounter.  Seeing change over time is especially wonderful.  The Ana Manganaro Clinic in Guarjila, El Salvador, is a great example of taking the long view.  I visited it first in 2004, and again earlier this year.  In those twelve years, it transformed from a small building where community health workers received training in the yard, to a comprehensive rural health centre, with a maternity care unit, dentist, nutritionist, physiotherapist and other key health services.  In 2010, the clinic integrated with the Ministry of Health.  Now it serves 16,500 people across eight municipalities and is recognised as a model for rural health services.

Find out about our latest Hands On project in Bolivia

Marlene, my guide when I visited this year, helped me to appreciate fully the transformation of the clinic.

END_OF_DOCUMENT_TOKEN_TO_BE_REPLACED

Jon Stricklin-Coutinho, Manager for Westminster Diocese, tells us why you should Pedal Against Poverty.

For nearly a decade CAFOD supporters from Westminster, Southwark and Brentwood have come together in the Lee Valley to Pedal Against Poverty. On Sunday 7 June almost 200 cyclists will be taking over the tow paths for a morning, just as they do every summer. Incredibly, in this ninth year of the event, our combined fundraising total over the years should reach £100,000!

Sign up to Pedal Against Poverty on Sunday 7 June 2015

So what can attendees expect on the day? As CAFOD’s Manager for Westminster Diocese, my day starts at Ponders End Lock – the starting point of our more challenging 19 mile route – at 10:15am. Riders can also choose the more family-friendly ten mile distance, with these riders congregating at Cheshunt. There’s a real party atmosphere as everyone picks up their ride number, with our volunteers registering the most spontaneous of our riders and giving out last-minute CAFOD vests and t-shirts. My responsibility is the safety briefing (we are cycling along a tow path after all!) and checking that everyone has a helmet. Then there’s the obligatory group photo before the shout is given and the cyclists are off! END_OF_DOCUMENT_TOKEN_TO_BE_REPLACED

So many people have made an extraordinary effort to get us to this point: the local health workers who selflessly stepped up to care for the sick and dying, 221 of whom here in Sierra Leone lost their lives to Ebola; the brave men and women who volunteered to join burial teams and dig graves, every day facing the strain of grieving families; and the people across England and Wales who’ve generously donated to CAFOD. END_OF_DOCUMENT_TOKEN_TO_BE_REPLACED