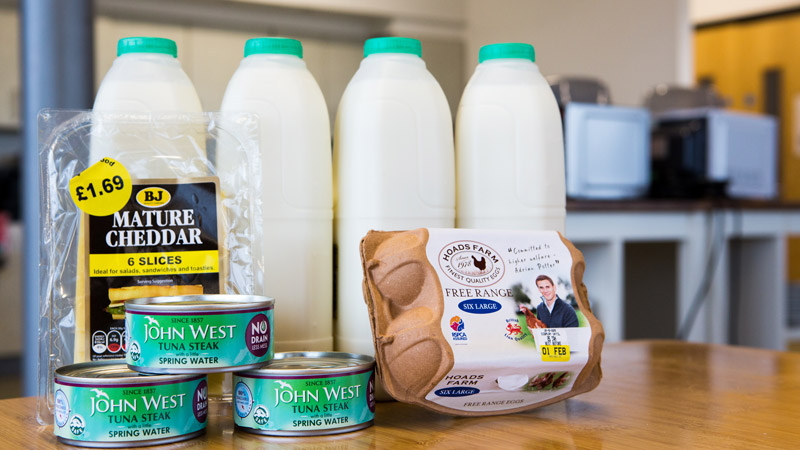 Could you cut out animal products like eggs and milk for Lent?

Susy works in the Theology team at CAFOD. This Lent, inspired in part by Laudato Si’, she will be going vegan. She tells us more about her reasons for abstaining from animal products and what she’s going to miss the most.

Thirty years ago my brother showed me a video (yes, it was a video in those days!) of a factory farm and from that day on I have been vegetarian. Or, to be more accurate, pescatarian.

I decided that there was so much choice in terms of available food, that there was no need to eat meat. I didn’t find it hard to be honest and I do not miss meat at all. However, when I spent a year in Chile, I think I must have been one of only two vegetarians in the whole country and I was viewed as somewhat suspect!

Thirty years on, I am now preparing to go vegan for Lent and hoping that I will start getting into habits that may last a life-time.

Have you decided what to give up for Lent yet? Tell us on Twitter or take our Lent quiz for inspiration.

I have worked at CAFOD for the last fifteen years, and during that time it has been made ever clearer that human kind is affecting the climate in ways which are destructive. The intense production of meat, milk and other animal products has huge negative implications for the environment. Much land in countries CAFOD works in is used to grow cash crops for animal feed, leading to massive deforestation and loss of habitat and species.

I have also been influenced by Pope Francis. I can’t claim that he is vegan, nor has he championed veganism per se. However, he does talk about our approach and our attitude to animals and to creation throughout his encyclical Laudato Si’. Here is one example:

“If we approach nature and the environment without this openness to awe and wonder, if we no longer speak the language of fraternity and beauty in our relationship with the world, our attitude will be that of masters, consumers, ruthless exploiters, unable to set limits on their immediate needs. By contrast, if we feel intimately united with all that exists, then sobriety and care will well up spontaneously. The poverty and austerity of Saint Francis were no mere veneer of asceticism, but something much more radical: a refusal to turn reality into an object simply to be used and controlled” (Laudato Si’, # 11).

Much production of meat, eggs and milk involves the exploitation of animals – they are seen as things that are merely there to satisfy the needs (or greed) of humans. Their value lies only in their usefulness to us. Do I want to be part of this?

Support with going vegan for Lent

Luckily, I find that I am not alone in my desire to eat less animal products. It helps that Lent this year is staring very soon after many people have been doing ‘Veganuary’ (going Vegan for the month of January). I have been delighted to see that in many food shops and coffee shops vegan foods are prominently labeled and displayed which is going to make my Lenten challenge so much easier.

I have also been well resourced by vegan friends and colleagues who have sent me many ideas, tips and useful websites – there is so much information and support out there for which I am very grateful.

Do you have tips for Susy on how to go vegan for Lent? Share them on Twitter

The greatest challenge this Lent

What do I see as my biggest challenges? I guess not having cow’s milk in my tea or with my branflakes! Checking a lot more labels. I also don’t want to be a nuisance if I eat out at restaurants, go around to friends’ houses for a meal, or attend a conference. But I hope people will be understanding and supportive. I have been told that I need to be careful to get enough B vitamins, so a supplement might be in order.

Perhaps you will consider joining me in my vegan journey this Lent…. You have little to lose and the world has much to gain.