As we move into the second half of our two-year plan, progress continues at great pace. It’s full steam ahead for all aspects of the project – terracing, dam-building, zai pits and tree planting are going on all across Kitui.

One extremely important development is that people are taking their new skills and applying them to their own gardens and farms. This will help improve the land even further, and provide yet more food and income for the people.

Thank you so much for your continued support, it means the world to us, and please keep Kitui in your prayers.

Kenya is home to many herbivorous animals including zebra, giraffe and a variety of antelopes – so it’s essential we build fences to protect the trees while they are young and fragile.

Unbelievably, we are already halfway through our project in Kitui. So much has been achieved in this short time, but there is much still to be done, and no time to waste.

We were happy to welcome our friends Mark and Louise from CAFOD in the UK, who were able to see first-hand the hard work being done all around the project site, look out for their reflections in your next postal update.

Your support makes all of this work possible – please accept our warmest thanks, and keep Kitui in your prayers.
END_OF_DOCUMENT_TOKEN_TO_BE_REPLACED 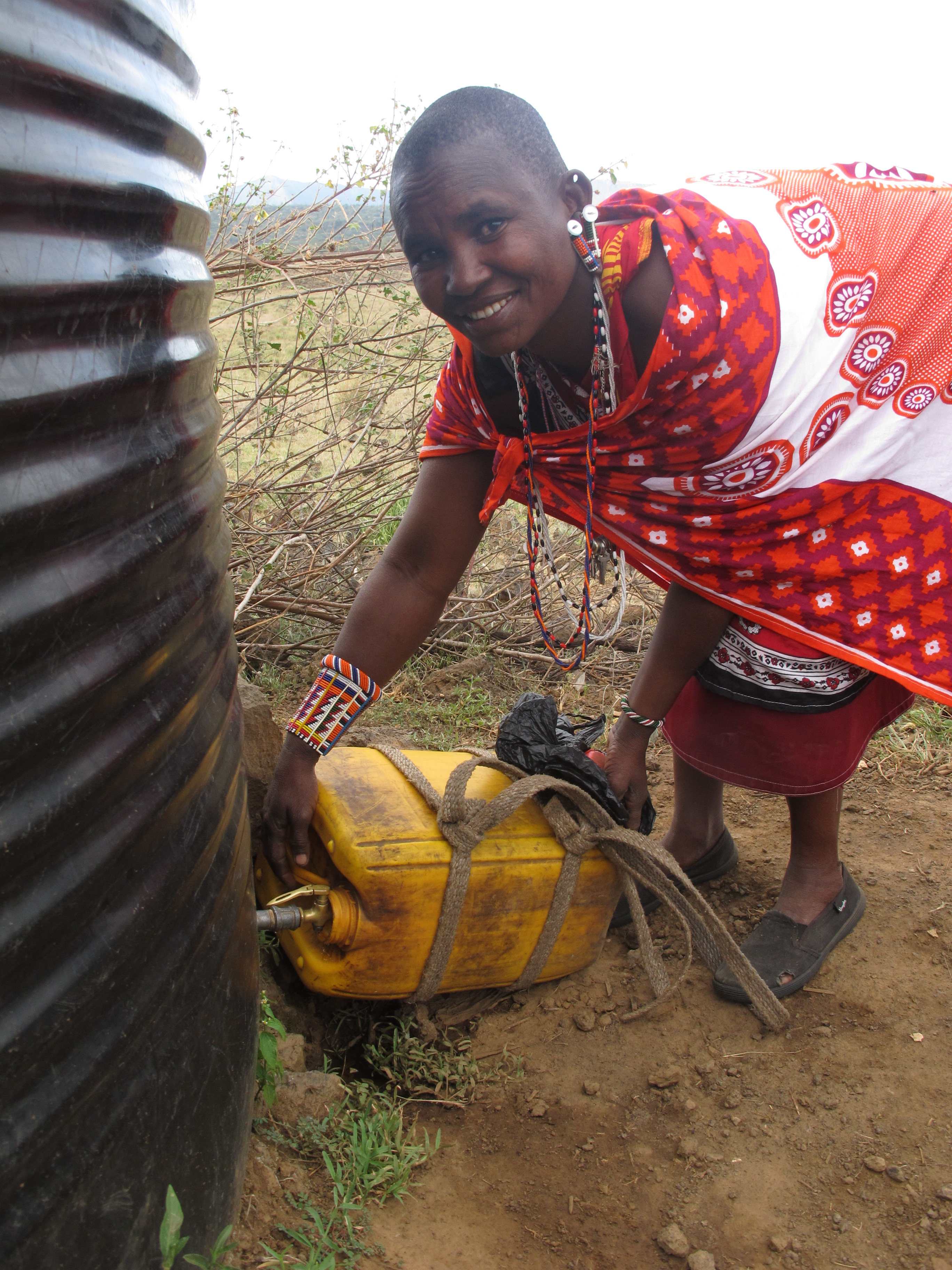 22 March is World Water Day. Thanks to your support, we have helped thousands of people around the world to have access to clean, safe water. Donate to our Lent Appeal today and the UK Government will match what you give, £1 for £1, enabling us to reach more of the world’s poorest communities.


If you walk up the slope at the edge of Simoi Masiodo’s tiny village, you’re confronted by a startling sight: thick plumes of steam spurt up from the barren ground. Today, thanks to your support, we’re using this steam to transform people’s lives.

On the edge of Kenya’s Rift Valley, hundreds of steam jets emerge from volcanic hot springs, hidden deep beneath the surface. In some places, these remarkable natural phenomena are tourist attractions. But Simoi’s village – a small cluster of mud huts surrounded by scrubland – is a long way off the tourist trail.

The village is extremely remote, and it’s hard to overstate how difficult life used to be for Simoi. For ten years, this was her daily routine: she would leave her village at four in the morning, along with the rest of her family and all their animals. They would trek through thick forest, taking care to avoid hyenas and buffaloes. Finally, at around midday, they would reach the nearest stream, where they would fetch water. Then they would turn around and set off home again. END_OF_DOCUMENT_TOKEN_TO_BE_REPLACED

Stella, Sabeth, Kisilu and Juliet are here to show you the work they’ve been doing to build a dam, and why this project is going to make such a difference to them in our video.

A new Hands On project is starting soon – check out the plans for Niger and get involved!

END_OF_DOCUMENT_TOKEN_TO_BE_REPLACED

Kieron is one of CAFOD’s Step into the Gap volunteers. He’s currently working as a chaplain at St. Mary’s Catholic Academy in Blackpool and is visiting CAFOD partners in Zimbabwe.

As the days continue to fly by in Zimbabwe and time is quickly slipping away, it’s time to share from my perspective what I have experienced so far. After spending nearly two weeks here in the landlocked country of Zimbabwe, there have been many moving encounters meeting with partners of CAFOD and communities.

After spending a few days in the capital Harare, getting to know our surroundings and being greeted by the CAFOD staff, we began our journey to the north west of Zimbabwe, to an area named Binga. After a long journey, in the heat of a cloudless sky, we arrived safe and sound.

END_OF_DOCUMENT_TOKEN_TO_BE_REPLACED

Lizzie is working as a chaplain at Newman University and Leila is a volunteer at the Good Shepherd in Nelson, respectively. They are both visiting Zimbabwe as part of CAFOD‘s Step into the Gap programme.

We’ve spent the past week in the west of Zimbabwe, in a place called Binga. And what a week it’s been. We’ve visited so many great projects and met so many inspirational communities, it’s hard to know where to begin. So here are just a couple of highlights from our week.

18-30? Learn about CAFOD’s gap year with a difference

For me, Binga has been an extremely memorable and moving experience. In Siamtelele village, Moyo Mthatshelwa, a 49-year-old farmer, warmly welcomed us with a traditional lunch of sadza, goat’s intestines, spinach, groundnut maize, sour milk and crumbled bread, all produced off their farm. I was touched by the generosity of his family. Moyo explained that “CAFOD’s scheme is very nice to us farmers. You’ve assisted us well. We thank you very much. It will improve ourselves and will pay for school for my thirteen children and help develop our future”.

END_OF_DOCUMENT_TOKEN_TO_BE_REPLACED

So many people have made an extraordinary effort to get us to this point: the local health workers who selflessly stepped up to care for the sick and dying, 221 of whom here in Sierra Leone lost their lives to Ebola; the brave men and women who volunteered to join burial teams and dig graves, every day facing the strain of grieving families; and the people across England and Wales who’ve generously donated to CAFOD. END_OF_DOCUMENT_TOKEN_TO_BE_REPLACED

I have seen first-hand the marginalisation and exclusion of the poor communities we work with, who are constantly defending their lands. My Christian vocation compels me to speak the truth and nothing but the truth for the common good. This is why I travelled thousands of miles from my home in Peru to visit CAFOD supporters and campaigners in London last October for the launch of their campaign, One Climate, One World. I wanted to explain the impact climate change is having in Peru and the conflicts occurring because of water shortages, so that people will better understand the importance of caring for God’s creation.

Water shortages and flooding in Peru

Latin America is one of the regions most vulnerable to climate change, yet some people don’t know about the scarcity of water in Peru. My country has 70% of the world’s tropical glaciers, and in the region where I work I can see how they are melting at an alarming rate. The statistics are catastrophic; the Peruvian government says that by 2030, all the glaciers below 5,000 metres will have melted completely.

In addition to the water shortages, which come about because of the disappearing glaciers, there is also an increased risk of flooding, because the displaced ice from the mountains can crash into the lakes. We fear that at any moment there could be another avalanche, like the one in 1970 that killed many thousands of people in my area. END_OF_DOCUMENT_TOKEN_TO_BE_REPLACED

Do you have a New Year’s resolution to do more DIY? The people of Kitui do! Their project is about so much more than sprucing up their home – it will make a huge difference to their lives. And it’s possible because of you, and the 1,500 other people who have been getting hands on. Thank you.

We hope you have received your second postal update along with your copy of our Side by Side magazine. If you’ve misplaced your letter, or haven’t recieved it, you can download the January update now.

Please keep Kitui in your prayers as the hard work continues.

Nicholas Oloo, CAFOD’s Programme Officer in Kenya is here to show us how the CAFOD Hands On project in Kitui will revitalise the landscape, and why trees are a crucial part of fixing the water supply.